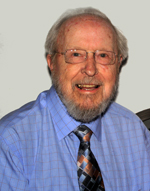 LeRoy Horpedahl passed away in his home on April 27, 2015 after a long struggle with Parkinson’s and other ailments. His last days were spent comfortably in his home surrounded by family and lots of visits from friends.  He was 91 years old.

LeRoy was born at home on the farm, one of six children of immigrant Norwegian parents in the rural farming community of Glyndon, Minnesota, April 13, 1924. He attended a one-room elementary school in the country, then boarded in town so he could attend high school. His enlistment in the Navy enabled him to obtain a Bachelor’s degree in Mechanical Engineering from the University of Minnesota through the Navy V12 program and was trained as an officer in the Navy at Notre Dame .

Discharged from active duty, LeRoy married the love of his life, Alice Hammett, and they began their 67 year adventure together! He worked as a lineman for the local power company, then moved to Indiana where he taught at Tri-State University. The opportunity to earn a Master’s degree took him to Montana State University in Bozeman, Montana. From there, he disappeared with his family into the Secret City: Los Alamos, New Mexico. Planning on a brief stay is this mountain community, LeRoy and Alice have made it home for almost 64 years.

LeRoy spent 45 years working on projects for Los Alamos National Laboratory, moving from the ranks of professional engineers into a management level at the lab. He was also very active in the life of Bethlehem Lutheran Church and many other organizations.

During the early years of his retirement, he and Alice were able to travel much of the world, including trips to China, Japan, Australia and New Zealand, Alaska, the Panama Canal, France, Italy, England, Africa and, of course, Norway, where the Norwegian he was taught as a young boy in America was still tinged with an accent that identified his father’s origin in Fjaerland.

The Cerro Grande fire destroyed their home and a life’s worth of memorabilia, family heirlooms and photos. However, LeRoy and Alice tackled the job of re-building, designing a comfortable Southwest-style home on the same sight. They were able to re-occupy their home long enough to care for their daughter, Kristine, while she fought and finely succumbed to the ravages of Lupus at the young age of 49.

LeRoy’s last few years have been in the loving care of his wife Alice and a number of nurses and caregivers. Whoever tucked him in at night received his selfless gift of: “Thank you for a wonderful day!” And whoever visited experienced the amazing light in his eyes and broad smile as he greeted them. He loved telling everyone about his children, grandchildren and great grandchildren and the exciting things they were doing. He was clearly so proud of them all!

LeRoy was preceded in death by his sister Harriett Randell and two brothers, Arnold and Clifford and by daughter Kristine. He is survived by Alice and their three sons: Gary,  David and Paul and their families. He is also survived by his brother, Harold Horpedahl (Sally) and his sister Ruth Farabee (Bill). They invite you to a service of remembrance to be held at Bethlehem Lutheran church, 2400 North Road, Los Alamos on Saturday, May 2 at 10:30AM.

In lieu of flowers, please consider a contribution to the Education Scholarship fund at Bethlehem Lutheran Church, Los Alamos.