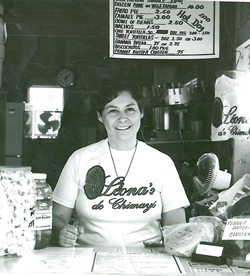 Leona Medina Tiede, 73, a resident of Chimayo, passed away suddenly on Sunday, November 29, 2014 surrounded by her loving family.

Leona was born in Jerome, Arizona, a copper-mining town, and grew up in Chimayo next to El Santuario de Chimayo. As the eldest of eleven children she spent her youth helping her mother raise her siblings. In her spare time she spent many days with Fr. Charles Lobato at the Santuario working in the gift shop, playing the organ, or assisting in mass as appropriate. After graduating from Santa Cruz High School, Leona entered the Carmelite Nuns of San Diego, CA. Later, with all intentions of returning, she left the order after six months due to an illness. She always said “I was called, but not chosen.”

Upon returning home, a twist of fate determined the next chapter of her life, to become an airline stewardess. This profession allowed her to travel the world for many years, some of those experiences were helping to evacuate refugees from Cuba, and transporting troops to and from Vietnam. While in Vietnam, she also visited many of the wounded troops in the hospital.

Then, in the summer of 1966, on one of her many travels to Hawaii, she met the love of her life, Dennis at a bus stop in Honolulu. They married in 1967 at Holy Family Church, had three children, living in Sonoma, California, Santa Fe, and finally residing in Chimayo. There she became an entrepreneur and opened Leona’s Restaurant and later a Tortilleria. Finally, returning back to live and work near El Santuario de Chimayo where she ran her little restaurant/gift shop for the past 26 years.

Her passion was to serve the church and her community. She achieved that by providing meals for the priests, assisting with numerous activities including Posadas, and serving as a Eucharistic Minister, and Lector. She also made herself available to the many pilgrims of the church, by listening to their testimonials satisfying their hunger for food and their spiritual well-being.

Mrs. Tiede is survived by her loving husband of 47 years, Dennis H. Tiede; the joys of her life, her children, Theresa Lovato and husband Anthony, Paul Tiede and wife Denise, Michelle Koller and husband Steve. She had ten beautiful grandchildren whom she was so proud of, Monica Lovato Romo and husband Fernando of California, Miquella, Amber and Analisa Lovato, Ryan, Kristin and Kaitlyn Koller, Andres, Lucas, and Matias Tiede;  her great grandchildren whom she adored, Josiah-Ray Martinez, Isaac Romo, and soon to be born Elena Romo; sisters and brothers, Patsy Trujillo and husband David of Truchas, Frank Medina and wife Ruby of Cuarteles, Leroy Medina and wife Eva of Chimayo, Sennie Gallegos and husband Hank of Chimayo, Josie Macias and husband David of Santa Fe, Donna Dominguez of Chimayo, Lawrence Medina and companion Betty of Chimayo. Madrina and Padrino of her wedding, Mickey and Dan Medina of Chimayo, and numerous nieces and nephews.

A rosary will be recited on the Wednesday, December 3, 2014 at 7:45 p.m. at Holy Family Catholic Church in Chimayo. Mass of Christian burial will be celebrated on Thursday, December 4, 2014 at 11:00 a.m. at Holy Family Catholic Church. Burial at a later date. The family of Leona Medina Tiede has entrusted the care of their loved one to the DeVargas Funeral Home & Crematory of the Espanola Valley. 505-747-7477- www.devargasfuneral.com.