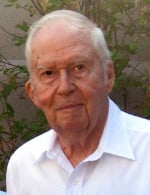 KENNETH JOHN WILSONJuly 1, 1926 – May 24, 2018
Kenneth John Wilson, age 91, passed away peacefully Thursday, May 24, 2018. He was preceded in death by his wife of 67 years, Marge.
Ken was born July 1, 1926 in Chicago, Illinois to John and Ruth Wilson. He attended one year at the University of Chicago before enlisting in the U.S. Army Air Force. After an honorable discharge in 1945, he chose to continue his education at Grinnell College in Iowa. This choice was a wise one, since in addition to studying economics, he met a lovely young lady from Tulsa, Oklahoma, named Marjorie Webster. After graduating from Grinnell and completing a year of post-grad work at Washington University in St. Louis, he and Marge were married in November of 1949.
The newlyweds returned to Ken’s hometown of Chicago where he worked for two years. Looking for a change, he took the advice of his doubles-partner from Grinnell (and best man at his wedding) and applied for a job in Los Alamos. Ken moved his young family across the country and would work at the Lab from 1951 until his retirement in 1988. During his career at the Lab, he worked in the Personnel Department and the Computing Division, serving as a Group and Division Leader. He always spoke highly of his years there and the people he was privileged to call colleagues. Ken stayed busy after retirement with service to the communities of White Rock and Los Alamos.
A born gamesman, Ken was an avid tennis player for much of his life. In later years, he found Duplicate Bridge to be the perfect outlet for competing. He and Marge (whom he described as the perfect partner, in bridge and in life) traveled across the country competing in tournaments and achieving the rank of Silver Life Masters.
Ken’s greatest achievement, however, was the family he raised with Marge and the legacy of love he leaves behind. He is survived by daughters Marcia (John) Justema, Leslie (Ted) Hauschildt, and Nadine (Jeff) Hokamp. His eight grandchildren (Jennifer, Jeff, Jessica, Julie, Megan, Stephanie, Katie, and Brett) all have fond memories of summer visits to Los Alamos. Additionally, Ken is survived by 18 great-grandchildren, most of whom had the great pleasure of spending time with him in recent years. He is also survived by his brother, Don Wilson of Crystal Lake, IL. We will all miss his wise counsel, breadth and depth of knowledge, sharp sense of humor, and the stories he told with a twinkle in his eyes.
Our family would like to thank special caregivers Henrietta, Trisha, Luisa, Kerri, Paige, Nicole, Brooke, and the Los Alamos Hospice. Any memorial contributions may be made to the Los Alamos Visiting Nurses. A private family memorial service will be held this summer.
The family of Kenneth John Wilson has entrusted their loved one to DeVargas Funeral Home & Crematory of the Española Valley. 505.747.7477 – www.devargasfuneral.com.
Menu
Los Alamos
18°
Clear
7:08am5:27pm MST
Feels like: 18°F
Wind: 0mph W
Humidity: 84%
Pressure: 30.33"Hg
UV index: 0
FriSatSun
36/19°F
43/25°F
41/23°F
Weather forecast Los Alamos, New Mexico ▸