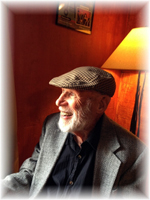 Jerry (Justin) Richard passed peacefully on May 30th, 2015 at his home in Silver City, NM.

Jerry was born in Pewee Valley, Kentucky on September 9th (according to the hospital) or September 10th (according to his father) in the year 1920. With a fondness for celebration, he celebrated both days. Jerry travelled abroad for the first time as a medic in World War II. He continued to travel throughout his life, visiting his relatives and friends from New Jersey to San Francisco and even all the way to Prague while he was in his 80s.

After the war, he entered the monastery and became a Benedictine priest at St. Bernard Abbey in Cullman, Alabama, which would instill in him a keen sense of self-discipline and multitude of stories to tell. Music was always a part of Jerry’s life, and it was at this time that he was able to get lots of schooling including degrees from Notre Dame and Oberlin College. This led to his work as a music teacher, a multitude of school concerts, years of running into past students at the supermarket, leading music at the 8 o’clock mass at the Newman Center, being choir director for the First Presbyterian Choir, and most importantly, leading years of evenings spent in song with his brother Charles, nieces, nephews, and their extended families.

After over twenty years, he left the monastery when he realized he not only needed music, but also dance. Soon after, he met his life dance partner and wife Norma, who dramatically changed his life and sadly passed before him in 1995. Norma and Jerry had four children and contributed wholeheartedly to communities working for social justice.

In addition to leaving behind those four children, their partners and families, Stephanie & Eric Vasquez (Nica & Elia), Sundi & Daniel Lynds, John & Angelita Padilla (Alisha & Vincent) and Jeremiah, he left a strong impression on anyone who remembers his shining eyes and heard his stories.

As someone who shared in Jerry’s life, people were welcomed to join in celebrating. The rosary was held at 9:30 a.m. at St. Francis Newman Center on Thursday, June 4th with the funeral mass following at 10am with Father Marcos Reyna officiating. Concluding service, inurnment followed at St. Vincent Catholic Cemetery. Pallbearers were John Richard, Jeremiah Richard, Eric Vasquez and Daniel Lynds. A reception was held at the Silver City Women’s Club, 1715 Silver Heights Blvd. (on the corner of Silver Heights and Yucca) at noon. Cremation took place at Terrazas Crematory. Arrangements were with Terrazas Funeral Chaples and Crematory “Trusted care for the ones you love” ~ 575-537-0777. To send condolences, visit www.terrazasfuneralchapel.com.