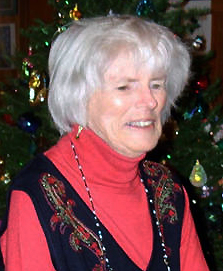 June was raised in Mendota, WI, the youngest child of Martha and Harrison Ramsdell. She outlived her parents, her husband, and all her siblings: Leland, Dorothy, Eleanor, and Irene.

Like her sisters, June became a nurse. In July 1950 she and her sister Irene sailed to Europe to work at the American Hospital of Paris. At the hospital, she befriended the writer Richard Wright, who was a patient. He later introduced June and Irene to a Paris they otherwise never would have known. When June indicated an interest in writing, he gave her his typewriter—a gift she treasured.

In the summer of 1954, while visiting Irene in Los Alamos, June met Edward Jurney, a physicist. The enchantment was instant and mutual. In short order June secured a position as an obstetric nurse at Los Alamos Medical Center. June and Ed married in May 1955 and had three children. Los Alamos was their beloved home for the rest of their lives.

In the late 1960s June resumed her nursing career in the fast-paced, demanding world of the operating room at LAMC. June quickly became a favorite with the doctors, who told her she had the perfect combination of skills—she was capable, efficient, and fun. She completed her nursing career as a staff member of the newly formed Los Alamos Visiting Nurses.

June’s childhood experiences and her compassion for the poor and disadvantaged guided her as an active member of the Democratic Party. She worked on campaigns related to civil rights, equality for women, and many other progressive causes. As with many of the generation that grew up during the Depression and World War II, she had a profound sense of moral clarity and faith that public action can lead to beneficial changes.

Like her father and sisters, June was a gifted musician and an avid music lover. Her sister Eleanor made possible the piano lessons June longed for as a young child. The lessons led to a lifetime of music enjoyment, especially classical music and jazz. She was an active member of a local piano group for years and had many dear friends in the group. Her beautiful piano was a centerpiece in each of her homes.

A lover of beauty and handcrafts, June took up weaving later in life and that, too, became one of her passions. She was an accomplished weaver and a member of several local fiber arts interest groups. For several years, she co-owned and operated a weaving and knitting store in White Rock.

In the early 1960s, June sought a church to attend with her children and chose the Unitarian Church of Los Alamos, where she was an active member the rest of her life. The church was a strong source of support to her in widowhood.

June was lively, wildly funny, engaging, and fully engaged in the world. After her husband, Ed, died in 2000, she spent her final years in the frequent company of her children, sisters, nieces and nephews, many dear friends—and always at least one cherished pet. She loved well, was well loved, and will be deeply missed.

A Memorial Service for family and friends will be held at 11 a.m. Saturday, July 20 at the Unitarian Church of Los Alamos.

The family of June R. Jurney has entrusted their loved one to DeVargas Funeral Home & Crematory of the Española Valley. 505-662-2400 – www.devargasfuneral.com