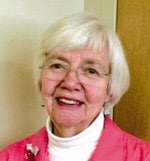 JUDITH S. DUDZIAK March 17, 2018
Judith S. Dudziak, 82, of Los Alamos, New Mexico, passed away on March 17, 2018 in Dallas, Texas of heart and lung failure.
She grew up in Western Pennsylvania and earned a BA from the University of Pittsburgh in 1963. She and her husband, the love of her life, Donald J. Dudziak, were married for over 58 years. Judy and Don lived in Pittsburgh, both working at the Bettis Atomic Power Laboratory (Naval reactors) until 1965, when they moved to Los Alamos, NM. There they raised their 3 children, Alan, Matt, and Karin.
Judy remained in Los Alamos most of the remainder of her adult life, with the exception of sabbaticals in Charlottesville, VA and in Switzerland, until she moved to Raleigh, NC in 1990. Upon retirement from North Carolina State University 12 years later, she and Don divided their time between Los Alamos and Dallas, TX. Wherever she lived, she enjoyed playing a variety of musical instruments, travelling, tennis, skiing, and hiking/camping with her family.
In addition to being a dedicated mother while raising three children, Judy worked many years for the Los Alamos National Laboratory, predominantly as a technical editor, as well as for NCSU as the associate director of the National Initiative for Leadership and Institutional Effectiveness (NILIE).
Judy also volunteered in many capacities throughout her adult life, including on a Civil Rights Board for Los Alamos County, and on a Preschool Board. She served as a Girl Scout leader even before she had kids and was active in the 1970’s and 1980’s in working for women’s equal rights as a member of the American Association of University Women. After retiring from NCSU and returning to Los Alamos, Judy volunteered for the Los Alamos Hospital Auxiliary and for the Los Alamos Senior Center, and served on boards at both institutions.
Judy had a strong passion for music, which she pursued from childhood throughout the rest of her life. She played piano, recorder, violin, and French horn, the latter in the Los Alamos Symphony, the Municipal Band, and as a member of the orchestra for many theatrical plays put on by the Los Alamos Light Opera, including Camelot, Guys and Dolls, The Music Man, and My Fair Lady. She was also a member of a recorder group with friends for over 40 years.
Judy encouraged all her children to play instruments and often supported the Los Alamos High School Band and Orchestra. She would even drive downtown just to watch the marching band during football halftime.
Judy had a kind spirit, natural grace, fabulous cooking skills, and a way of putting people at ease. She served as an adopted mother and mentor to many people in her life. She was above all a beloved wife, mother, grandmother, aunt, and friend. She will be greatly missed.
In lieu of sending flowers, the family asks that you please consider supporting a cause closely aligned with Judy’s passion: The Mr. Holland’s Opus Foundation, which provides musical instruments for underprivileged children. www.mhopus.org/donate.
Menu
Los Alamos
45°
Fair
6:36am5:58pm MST
Feels like: 37°F
Wind: 11mph WSW
Humidity: 14%
Pressure: 29.9"Hg
UV index: 0
SatSunMon
46/27°F
39/25°F
41/25°F
Weather forecast Los Alamos, New Mexico ▸