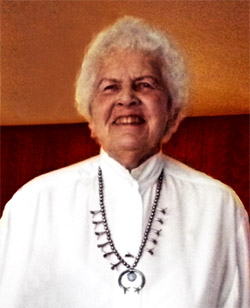 She was the matriarch, and with her husband of more than 60 years, Martin, the parent of a large, loving family who adored her; respected and benefitted from her surpassing intellect; and marveled at her wide ranging talents and interests, always accompanied with common sense and humor.

Judy was born in New York City on May 3, 1927 to Henry L. Cassidy and Gladys Carleton Cassidy. She was preceded in death by her parents, her husband, Martin, and her brother Carleton Cassidy.

Judy was raised in several suburbs of New York City. During much of the Depression, her family lived in rented, bank-owned foreclosed houses until they were sold.  She would regale her family with childhood stories of going into the city with her mother to Carnegie Hall, the New York Philharmonic, the Museum of Modern Art and to see the Nutcracker Ballet at Christmas time, and of spending a summer in her youth working for the New York Public Library while living with girlfriends in an upper Manhattan apartment.

At the age of 16, Judy graduated from Irvington High School and attended Mt. Holyoke College in South Hadley, Massachusetts. In 1943 she was one of the finalists of the prestigious national Westinghouse Science Talent Search. In 1947, she received her Bachelor of Science in Physics, with honors, joining a conspicuously small number of female physics majors in the country. In a decision that was characteristic of her pioneering and adventurous spirit, Judy took a job at the Oak Ridge National Lab in Tennessee, picking up and leaving everyone and everything she knew.

She worked at Oak Ridge in the physics division, located in the old original reactor building, from 1947 to 1951. While living in Tennessee, near the Great Smokey Mountains, Judy became an avid hiker and very talented photographer. She was recruited by several faculty members in the Physics Department at Vanderbilt University and enrolled there in 1951 to pursue graduate work in physics. It was at Vanderbilt she met her husband, Martin. They were married on August 23, 1952. Judy subsequently received her Master’s Degree in Physics.

In 1953, their first child, Michael, was born and the new family moved to the Washington D.C. area, moving a year later to Los Alamos. After the birth of her second child, Philip, Judy began work in P Division at LANL, eventually specializing in making targets for linear accelerators, a career that spanned nearly 40 years, collaborating with many of the great experimental physicists and engineers at LANL and other laboratories worldwide. While maintaining a career, Judy had three more children (Kathryn, Paula and Daniel).

Judy was an accomplished pianist and sang for decades in the Choral Society. Until earlier this year, she was an active participant in her piano group, which meets to perform for each other and socialize. Her dedication to music and Martin’s encouragement led to a family of skilled musicians. Judy also displayed artistic skill in drawing, oil painting and wood carving.

For most of her life, but particularly in retirement, Judy read more books in a month than most people do in a year, on a staggering array of subjects. She travelled widely in Europe, Israel and Thailand with Martin. Over the decades, Judy could be seen walking and jogging the canyons near her house, riding her bike around Barranca Mesa, playing tennis up at the Middle School Courts and swimming at the Golf Course Pool and later at the Walkup Pool.

Anyone acquainted with Judy could not help being impressed by the incredible range of her interests and knowledge. She was one of the women who truly helped pave the way for generations of women who have followed her in the sciences. She always found time to advise and mentor young women. However, through it all, the driving passion of Judy and Martin’s adult life was their family. The family gratefully acknowledges the indelible impact of her on each of their lives.

Judy will be interred at Guaje Pines Cemetery, beside her beloved husband, in a private ceremony. A public memorial celebrating Judy’s life and many accomplishments will be scheduled in May, on a date to be announced. Because Judy was a supporter, contributor and leader in so many local community institutions, donations may be made, in lieu of flowers, to the Los Alamos Heart Council, the Sanctuary at Canyon Ridge Hospice, the Friends of the Shelter, or any favorite group or organization supporting the needs of the community.