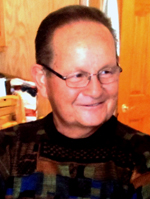 Johnny O. Atencio, 76, a lifelong resident of Dixon, passed away of a lengthy illness surrounded by his loving family on Monday, November 14, 2016.

Johnny graduated from El Rito in 1960 and later attended Trinidad State Junior College, CO. His career began in Los Angeles, CA, working for McDonald Douglas Aircraft. He moved back to NM where he began working at Los Alamos National Laboratory as a radiological control technician where he retired after 33 years of service.

Johnny is survived by his loving wife of 49 years, Helen Atencio; his children Yolanda Trujillo of El Rancho; Jonathan Atencio and wife Carrie of El Rancho; Bernadette Vigil and companion Jody Armijo of Dixon; Yvonne Gonzales and husband Joseph of Los Alamos.  He leaves behind ten beautiful grandchildren who he was so proud of and adored: Brandon, Selina, and Karissa Trujillo; Isabel, Ashley, and Elena Atencio; Kiana and Miranda Vigil; Alicia and Antonio Gonzales.  Sister Florence Atencio of Dixon; Nelson Atencio of Albuquerque; Fred Atencio of Taos; and numerous nieces and nephews.

Johnny loved watching his grandchildren play sports and also enjoyed watching boxing, baseball, football, and Nascar racing. Johnny will be remembered as a loving husband, father, grandfather, brother, uncle, neighbor and cherished friend. He touched the hearts of many and was a true blessing to all who knew him. Johnny was a man of few words, but spoke volumes. He will be remembered for his strong faith, generosity, great advice, and his sense of humor.

The family of Johnny O. Atnecio has entrusted the care of their loved one to the DeVargas Funeral Home & Crematory of the Espanola Valley. 505.747.7477, www.devargasfuneral.com.