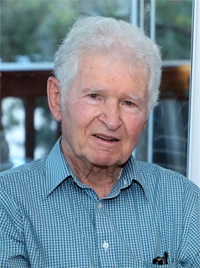 He was a gentle and loving man with great integrity, and will be missed by all.

The first forty-one years of John’s life were spent in the Boston area where he established his family and career. Halfway through his junior year of high school (January, 1946), at the young age of 16, he decided to pursue serving his country and firstly did so in the United States Maritime Service, followed by a three-year appointment with the United States Coast Guard (February 1947 to February 1950). For the first two years, John was stationed in the South Pacific (Okinawa, Philippines) and assisted the Coast Guard in operating Long Range Aid Navigation stations. His final year of service was at Floyd Bennett Naval Air Station in Brooklyn, NY, and his duties included operating boats in support of the airplanes. John was just twenty years old when he was honorably discharged.

John then returned back to New England and first worked as a plumber for his father’s company, C.E. Guenette Plumbing and Heating (along with his brother Alfred). In September of 1951, he started as a photo lab assistant at a local studio in Boston, thus beginning his long career as an industrial photographer. Five years later, he started working for Edgerton, Germeshausen, & Grier (EG&G) starting as a Photo Specialist with an expertise in high speed photography and finishing as a Department Supervisor. John had a successful, thirty-one year career with EG&G working on fascinating projects (including photographing nuclear detonations) and making life-long friends. John finished off his career (1990-1998) with various sub-contractors at Los Alamos National Laboratory working in their photography department and as an escort.

In 1952, John’s best friend Larry Pelrine introduced him to his fiancé’s sister, Margaret Toth. They were eventually married Nov. 17, 1957, in Everett, MA, at St. Theresa’s Church.

In 1970, John’s job at EG&G was re-located to Los Alamos, NM, so the family moved and has remained ever since. John fell in love with the wide open spaces of the “Land of Enchantment” and he loved showing off Northern New Mexico to his many visitors. His favorite places to visit were Bandelier National Monument and Overlook Park in White Rock.

Photography was an integral part of John’s life, both as a career and a hobby, and he was a certified member of the Professional Photographers of America, Inc. After retiring from EG&G, he started his own photography business specializing in family portraits and weddings. John always had his camera with him and one of his biggest joys was printing photos and sharing them with his friends and family. His other hobbies included Amateur Radio, playing pool, riding his Honda motorcycle, and hanging out at the White Rock Senior Center in his later years.

John was a dedicated family man and attended every assembly, sporting event, or musical performance of his children and grandchildren. His Catholic faith was a big part of John’s life  and he was a member of the Immaculate Heart of Mary Catholic Church (IHM) for over fifty years and was a member of the Knights of Columbus. He also continued to be an avid New England sports fan and instilled in all of his family the joy and agony of cheering on the Red Sox. His Red Sox cap was his prized possession and he never left the house without it.

Funeral Services for John will be held at IHM Catholic Church Friday, Sept. 23, 2022.

A Rosary will be recited at 9:30 a.m., followed by a Mass of Christian Burial at 10 a.m. After the service, a luncheon reception will be held at the IHM Karen McLaughlin Hall. Burial will be at 2:30 p.m. at Guaje Pines Cemetery following the reception.

The family requests that in lieu of flowers donations be made to the IHM Christian Concern Committee (https://www.osvhub.com/ihmcc/giving/funds); or to St. Jude’s Children’s Research Hospital (stjude.org).

The family of John Guenette has entrusted the care of their loved one to the DeVargas Funeral Home and & Crematory, www.devargasfuneral.com.