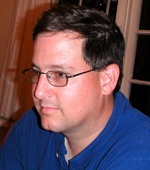 John F. Brackbill, age 42, died unexpectedly at his home in Colorado Springs. A welfare check requested by his sister found him deceased June 4.

John is survived by his parents Jerry and Isabel Brackbill, his sister Lise and her husband Duane Barber, and their three children, Anneli, Craig and Neil, all of whom live in Portland, Oregon.

A gathering in John’s memory will be held on Tuesday, June 16 from 4 to 6PM at the home of the Olingers, 1964 Juniper Street, Los Alamos.

John was born May 8, 1973 in Los Alamos and graduated from Los Alamos High School in 1991, attended the University of Montana,  and earned a BA and MBA in Accounting at the University of New Mexico. He worked at many jobs in Los Alamos, including NAPA, Safeway, The Blue Window, and the Los Alamos National Bank. He worked at Los Alamos National Laboratory from 2000 to 2006, first as a Budget Analyst for the Materials Science and Technology, where he learned how much he enjoyed working with scientists and engineers, and then as a Weapons Production Accountant where he set up a cost accounting system from scratch that would meet DOE requirements.

He left job security behind when he moved to the Northwest to be closer to family. He worked for high-tech companies, beginning with Pixelworks in Tualatin, OR, 2006 to 2007, for whom he traveled to Taiwan to train his replacement. He worked for Quantum Corporation in Bellevue, WA, 2008 to 2010, as a senior cost accountant. The Quantum he worked for was the product of a merger that didn’t result in a merged accounting system.  Quantum sent him to Shanghai, where he learned that his hosts thought fish eyeballs were a delicacy.

With his marriage in 2010 to April Barrick, he moved back to New Mexico where he worked for the Presbyterian Health Plan and Sandia until 2013. His divorce from April, the loss of his job, and the difficulty in finding another wore him down. He found a new job in 2014 at DPIX in Colorado Springs, CO, where he lived until his death.

John loved to camp in the Jemez with his friends. His favorite activity was 4-wheeling with his dog by his side. He fished, but he couldn’t eat fish. He hunted ducks and grouse, even after a terrible hunting accident that cost him an eye, but it left him with a strong reluctance to wound an animal. He joined the Jemez Springs Volunteer Fire and Rescue and endured the physical training, but never actually found where he was supposed to go. He was a formidable Bananagrams player. The longer and more obscure the word, the better pleased he was.

John fought a lonely battle with alcoholism that he hid from his family. It cost him his life in the end.