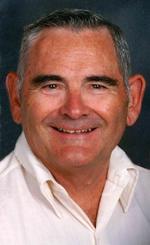 Joel Mann Williams Jr. (“Pete” to his family), age 77, died Saturday, June 3, 2017. He passed away peacefully, in his home, surrounded by his entire immediate family.

Joel is survived by his loving wife of 55 years, Mary Carol; his daughter Reine; son Michael; two grandchildren, Steven and Morgan; and many family members back home in Virginia. Joel also leaves behind countless close friends, colleagues, and the close-knit members of the local tennis community.

Joel was born in Suffolk, Virginia, to Joel Williams Sr. and Mildred Williams. After graduating high school, he moved to Williamsburg, Virginia, to attend the College of William and Mary. At William and Mary, he met Mary Carol and earned a Bachelor’s degree in Chemistry. Soon after graduation, Joel and Mary Carol got married, then moved to Evanston, IL where Joel attended Northwestern University and received a PhD in Chemistry. After starting a family, Joel, Mary Carol, Reine, and Michael lived briefly in St. Paul, Minnesota before returning to their native state and city of Waynesboro, Virginia. Joel worked at DuPont Corporation in Waynesboro for a few years before moving again, in 1972, to Los Alamos.

Joel had a long and very successful career at Los Alamos National Laboratory. He generated countless papers and received numerous patents. Outside of work, Joel and Mary Carol loved to travel, garden, and worked closely together on art and photography projects. Over the years, Joel and Mary Carol traveled to every state, most national parks, and many countries.

Joel’s passion was tennis. He loved to play and loved to watch others play. When he wasn’t playing, he did everything he could to support tennis activities in Los Alamos. He lobbied in support of tennis facilities and served as Treasurer and Captain of the local tennis team. Even when sidelined due to illness, he still traveled to cheer on his mates in their matches.