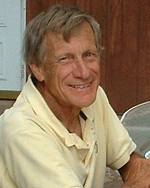 Jerome J. Erpenbeck, age 83, a long-time resident of Los Alamos, passed away from cardiac arrest on Wednesday, February 22, 2017 at home.

He came to Los Alamos after a post doc under John Kirkwood at Yale University and loved his work in GMX Division and later in T Division at LANL as a theoretical physicist; he remained a visiting scientist up until his death.

His hobbies included baseball, tennis, badminton, croquet, basketball, landscaping, gardening, reading, opera, and classical music. He organized the Connie Mac and Stan Musial baseball leagues in Los Alamos and earned the nickname Abner Doubleday. He enjoyed coaching 13-14 year olds as he felt he could make a positive impact with that age group; the US Baseball Federation honored him with the NM Amateur Baseball Coach of the Year Award in 1987. He loved the Cincinnati Reds and saw them win the pennant and the World Series with the Big Red Machine in the 1970s. He was also a tireless supporter of the men’s NM Lobo Basketball program.

Jerry was a devout Catholic who loved the Church. Services are pending at this time and will be announced as soon as they become available. The family of Jerome J. Erpenbeck has trusted the care of their loved one to the DeVargas Funeral Home & Crematory of the Española Valley.

To send flowers or a memorial gift to the family of Jerome J. Erpenbeck, visit Sympathy Store.