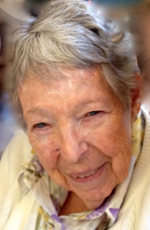 She is survived by her brother, James Carpenter and his wife, Cleo, of Alexandria, MN; four children: Marguerite, and her husband, Barry Cooper, of Tempe, AZ, their children, Christopher, Shawn, and Amy; Bryan, and his wife, Kelli of Gilbert, AZ, their children, Shaun, Jason, Nathan, Thomas, Ryan, Kylli, and Jeremiah; Stephen, of Minneapolis, MN; Cynthia, and her husband, Brian Lillquist, of Minneapolis, MN; and six great-grandchildren.

She was born in Minneapolis, MN and spent her childhood in Sauk Rapids, MN. She graduated from St. Cloud Teachers College (now St. Cloud State University) in 1944. She began her teaching career in Ironwood, Michigan, and Schofield Barracks in the Territory of Hawaii, where she met her future husband.

They moved to Los Alamos, NM, in 1953 with their infant daughter, Marguerite. Her other three children were born there. In 1963, she returned to teaching and taught at Mesa Elementary, Little Forest, and Aspen Elementary schools until her retirement in 1987. She was active in the Los Alamos First United Methodist Church and the Red Cross. After her husband died, she moved to Arizona in 2002.

Memorial services will be held at Dayspring United Methodist Church, 1365 East Elliot Road, Tempe, AZ on Saturday, October 3 at 10:00 AM. Internment will be at Santa Fe National Cemetery at a later date. The family suggests that in lieu of flowers, memorial donations be made to Dayspring United Methodist Church. The family may be reached at marguerite.cooper@gmail.com.