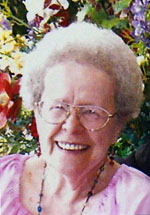 Jean Krinard Evanich passed away on March 16, 2015 in Kenosha, Wisc., with her daughter, Sheila, and her son-in-law, John, at her side.

She was born to Albert and Mamie Krinard on May 11, 1924 in Alton, Illinois along the Mississippi, a river she held dearly in her heart.

At the age of 15 she put her name in a magazine for pen-pals around the world. One response was from Johnny, (John M. Evanich) in the CCCs in Oregon, later to become the love of her life. They were married November 14, 1942, he is his Army uniform and she in her favorite purple dress.

For the year and a half John trained in various camps to join the fighting in Europe, Jean followed the 5th Armored Division from California to New York. She loved the adventure of traveling with her suitcase on trains and the Greyhound bus.

She is remembered by her sister Gloria Krinard of Los Alamos, NM, sister-in-law Willough Dean Krinard of Mt. View, AK and sister-in-law Mary Kozdras of Clearwater, FL., and many other nieces, nephews and friends. Jean was also especially close to a lifelong friend, Patty Holmes of Shererville, IN.

At the end of WWII Jean and Johnny moved to Whitting, Indiana and then to Lansing, Illinois where they raised their family. After retirement they lived for 22 years in New Port Richey, FL. and then Jean resided for 15 years in Los Alamos, NM before spending the last 7 months of her life in Kenocha, WI.

After raising her children Jean worked in retails stores in Munster and Hammond, IN.

Following her devotion to family, her other passions in life included a love of books, reading, adventure, traveling, cactus gardening, sewing, writing letters to friends around the world and a specific love of the pioneer west, liking to refer to herself as “Buffalo Woman.”

Jean will be remembered for her embrace of her Slovenian in-laws, learning how to make blood sausage and povitica. She was never prouder than at graduations, unless it was at the birth of grandchildren.

She traveled with the National Geographic crew through Baja Mexico, and went off to Australia, Fiji and Kiribati because her granddaughter was in the Peace Corps there. Returning home she signed up for a camel trek in West Texas.

Jean’s most important legacy, however, would be her smile, laughter, never saying an unkind word, and her positive attitude. She chose that regardless of the hard times and challenges, she would be kind and positive. Her memory will live in the hearts of all who knew her.

Funeral arrangements will be made at a later date.

When writing out her Living Will, these are the four songs she wanted played at her funeral. They are included here in hopes you will see the sparkle in Jean’s eyes as you remember this music.