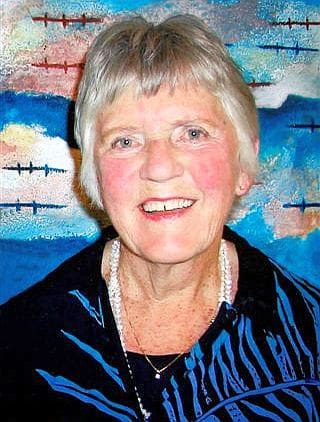 Janet Lucille Brown Fowler was born on June 3, 1919, in Bucyrus, Ohio, the daughter of Neva and Carl Brown. She graduated from Bucyrus High School in 1937 and moved to Cleveland, where she completed Nurse’s Training at St. Luke’s Hospital, received her RN degree, and then worked there as a nurse.

She met Max Fowler in Cleveland and they were married in 1942. Six months later Max joined the U.S. Navy and the newlyweds moved to Annapolis, Maryland. They lived there throughout World War II, Max teaching at the Naval Academy and Janet working at Annapolis City Hospital. After Max was discharged, they moved to Ann Arbor, Michigan, where Max earned his Ph.D. in physics in 1949. They then moved to Manhattan, Kansas, where Max taught in the physics department. Their daughter, Mary Janet, was born in Manhattan shortly after their arrival there.

Max began working as a consultant at Los Alamos in the summer of 1951, and the whole family spent wonderful summers there. In 1957 the Fowlers moved to Los Alamos for good and lived on Arizona Avenue at the edge of the forest for many years.

Janet, who had started taking piano lessons at age 7 and continued off and on through the years since then, became a piano teacher. She taught several generations of students in Los Alamos for more than 25 years. With her passion for music of all kinds, Janet also supported the Santa Fe Opera for many years. She ran the Los Alamos satellite box office in the 1960’s, and was a member of the Los Alamos Opera Guild. Later she became a member of Guilds, Inc. She also accompanied many Los Alamos school students in recitals and music competitions, and gave a number of acclaimed recitals herself.

The Fowler family spent the summer of 1962 in Italy, where Max did consulting work, and they also visited several other European countries. This inspired in Janet a lifelong interest in traveling and in languages. She and Max took many trips to places around the world, for both business and pleasure. They went to Russia 10 times over the years for Max’s work, and Janet became a good Russian speaker. She studied and used French, Italian and Spanish as well. She also enjoyed traveling with Mary, and in their 3 trips to the Mediterranean in the 1990’s she even picked up smatterings of Greek and Turkish.

At home in Los Alamos, Janet hosted countless parties and gatherings over the years for scientists from around the world. She was also a popular addition to the Megagauss Conferences, which Max initiated in Italy in 1965. Janet attended every one of the conferences, helping to plan and lead guest activities and offering support and friendship to many scientists and their families.

An ardent skier well into her 80’s, Janet was on the Pajarito Mountain Ski Patrol for almost 25 years. She was also an accomplished runner, swimmer and tennis player. She took physical and outdoor challenges in her stride. She was quartermaster and cook for countless family camping and fishing trips in the early years, and she and Mary rafted through the Taos Box at high water when Janet was almost 70.

Janet and Max’s Arizona Avenue home of 43 years burned in the 2000 Cerro Grande fire. They started over in a home on Camino Medio on North Mesa, where Janet enjoyed creating an extensive and beautiful flower garden. In 2006, Max died, and the next year Janet left Los Alamos to live at El Castillo, a retirement residence in Santa Fe. Still active, she had a deck built onto the back of her apartment and spearheaded the creation of beautiful gardens and walkways along the entire side of the building, which have been enjoyed by her and all her neighbors and admired by passers-by.

Janet loved everything about living in New Mexico. She enjoyed friends of all ages and all walks of life and was interested in everything around her.

She is survived by her daughter, Mary Janet, of Charlottesville, Virginia; by her brother- and sister-in-law Bert and Kay Fowler and her nieces Mary Leathem and Pat Paul, all of Massachusetts; by her special friend and assistant in recent years, Wendy Graf, of Santa Fe; and by many treasured friends in Los Alamos and Santa Fe and around the world.

To honor Janet’s memory, we suggest donating to any local charity or organization whose activities would please her.

Janet’s life will be celebrated with a Memorial Service on Thursday, May 3, 1 p.m., at the United Church in Los Alamos, 2525 Canyon Road.