He was born June 30, 1945, in Borger, Texas, then spent much of his youth in the Akron area. His family were members of the Studebakers of automotive fame. He once wrote “Looking back, growing up in Cuyahoga Falls, Ohio, was about as good as it gets for me.”

He came to Los Alamos and the Laboratory in 1965, after graduating as valedictorian from the Ohio Technical Institute with an associate degree in Electrical Engineering. He spent much of his life adventuring in the out-of-doors, taking part in every conceivable activity: mountain biking, downhill and cross country skiing, canyoneering, backpacking, summit climbing, trail running, hiking, rock and ice climbing, and cave exploration.

His friends remember him as a perpetual source of fun and adventure, leading at the cutting edge of adventures. When the adrenaline got flowing, Jan was there. He was always ready to lend a hand, whether a friend needed a little help or a companion needed rescue from a serious outdoor mishap.

Jan joined the Los Alamos Mountaineers in 1980, then served as president, climbing school director, and rescue director. He was a climbing school instructor for 18 years. Jan led over 100 club and private trips. Once the internet came to our lives, Jan built the club’s initial Web presence, and maintained it for years. The club honored him for his decadal contributions by electing him Life Member, one of less than a dozen named over the club’s 70 years. In a completely different sphere, Jan was a member of the Lads of Enchantment choral group. 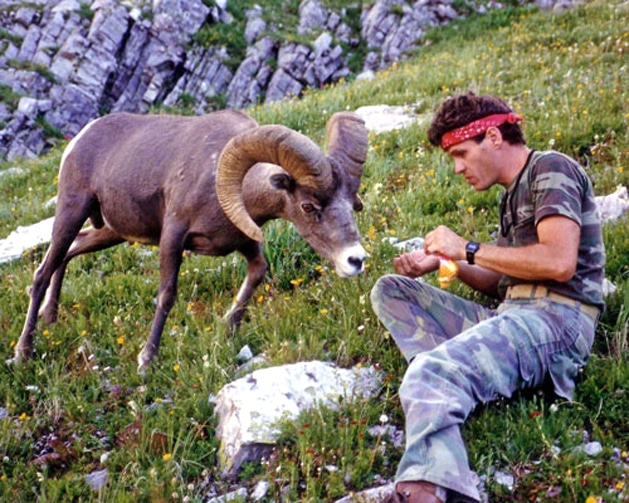 Jan Studebaker and a friend from Truchas share a snack. Courtesy photo

He lived for years in the Jemez Mountains, and explored its every nook and cranny. He returned to Los Alamos for his last years, when he was afflicted by the debilitating illness that ended his full and adventuresome life.

Jan is survived by daughters Lisa Jennings of Santa Fe and Jennifer Kneeland of Auburndale, Florida, and grandchildren Makayla Rayne Kneeland, Kaiden Scott Kneeland, and Kyler Jaxson Kneeland. His siblings also survive him: Phyllis Ann Williams of Fairview Heights, Illinois, Penny Kay Studebaker of Denver, Colorado, Galen C. Studebaker of Westcliffe, Colorado, and Blix Ziruolo of Dillon, Colorado, with 5 nieces between them. As close as family, in many ways, are his friends who continue their outdoor adventures, but know that they will never be the same without Jan.

A service of memorial and celebration of life will be held at the Unitarian Church of Los Alamos, 1738 Sage Loop, at 2 PM Monday August 8, followed by a reception in the church Fellowship Hall and patio.