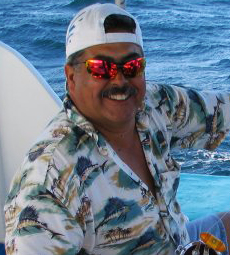 Howard was born August 17, 1959, in Santa Fe, NM. He graduated from Los Alamos High School in 1978 and later served in the U.S. Navy. He lived a life full of adventure and never bypassed an opportunity to make a memory, making many life-long friends along the way. After exploring the country, he settled his family in Albuquerque and built his business as an auto mechanic. He spent his spare time wearing Hawaiian shirts, hopping beaches at Elephant Butte Lake, scuba diving in San Carlos, Mexico, snowmobiling or skiing in Colorado, and flying his plane across the tri-states sky.

He is survived by his mother, Guadalupe Guthrie; his sister, Anna Wormald; his daughter, Sada Abila and husband Sergio; his son, Shawn Guthrie; his two grandchildren, Deklan and Shevelle; his nephew and niece, Keenan and Bianca Wormald; and his faithful dog, Zee. He is preceded by his father, Kenneth Guthrie; and his friend and former wife, Cindy Williams.

Howard was a gentle giant, who loved people, cherished his family, and truly valued what life had to offer. Howard’s girlfriend, Melissa Watson, a loving soul, whom he adored, also lost her life in the crash. They both will be missed dearly.

Cremation has taken place. A celebration of life will be held at 5:00 p.m. on Saturday, January 17, 2015 at the American Legion Post 49, at 11005 Central Avenue NE, Albuquerque, NM 87123. In lieu of flowers, contributions may be made to www.gofundme.com/jitn5c, a fund established to assist Howard’s family with final expenses.