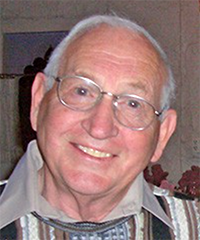 Herald Wesley Kruse, a quiet man whose deeds spoke louder than his words, died at age 94- the end of a remarkable life.

He was a child of the Great Depression, born into the Midwest home of Edna and Reverend Melvin Kruse, a Methodist minister who christened him, “Herald,” calling out the hopeful beginning of an enduring private faith and life-long love of music and learning.

Despite his humble beginnings and an ill-fated childhood experiment involving a family of snowy owls on a high branch that “let him have it” after he curiously circled the tree from below to observe their storied neck rotation, he would go on to pursue a career in experimental nuclear physics.

After graduating with a master’s degree in physics at Kansas State University, he would find himself auspiciously assigned in 1953 to the “Neutrino Detection Project” headed by Drs. Frederick Reines and Clyde Cowan whose experiments would later receive the Nobel Prize in Physics in 1995 for their contribution to the understanding of the origins of the universe. Herald would continue to promote the study of the tiny neutrino during his career at LANL while working in P and J Divisions.

Deciding to stay and marry Peggy Jo Randolph in Los Alamos where they were laying a foundation,  rather than to follow neutrino research elsewhere, was one of his many decisions to prioritize family. He and Peggy would be married 63 years before her passing in 2020, devoting themselves to raising two grateful daughters, enjoying lifelong friendships through their church and monthly bridge clubs…and travelling. Over the years, they moved five family members needing more support to the Los Alamos area and hosted a dear, German exchange student, Sabine.

Herald also accumulated a surprising list of contributions to the community: cofounding Los Alamos Home Improvement with Jerry Beery and Wally Leland; serving as Chairman of the Board for Cliffside Corporation, the second phase of development in Pajarito Acres; and founding a rather gritty private home business in retirement called Boron Products.

But perhaps his biggest community contribution came through the sound of music. For over 30 years, Herald directed the Chancel Choir at the First United Methodist Church. The enormously talented and dedicated chorus and musicians from the church and larger community regularly performed major choral works with orchestra as well as light operas by Gilbert and Sullivan, delighting performers and audiences alike. In retirement, he and Peggy also enjoyed singing with the Sangre De Christo and Coro de Camera Chorales.

While the highlights of Herald’s life are remarkable, they need not distract from his true greatness: his simple, day-to-day dignity. Witness how he cared for once effervescent Peggy through her debilitating dementia; how he continued to sing as a regular choir member until he was 90, twenty more years after he retired from directing; and how in his own decline he shared the gifts he still had:  a thoughtful smile, a grateful hand squeeze and an appreciative appetite, especially for dessert.

Like Peggy Jo before him, his physical self is no longer here, but his spirit can be found wherever family love is freely given, in dedicated and humble service of church and friends, and in curious wonder of our miraculous world.

He is survived by daughters DeAnna (Cliff Reed), Karen (Jane Donegan and son, Joe Johnson), great granddaughter Rebecca Johnson and sister, Nadean Kruse.  Heaps of praise and thanks to the Care Givers who have graced the Kruse home through it all, allowing Herald to finish out his life at home with comfort and dignity: Amelia, Doreen, Elly, Ericka, Lucy, Sharai, Weifeng, and Alaina, Ambercare Hospice, LAVNS and Dr. Ziomek. Thank you.

In lieu of flowers, please consider donations to The First United Methodist Church in Los Alamos, The Los Alamos Family Council or other worthy organization of choice.