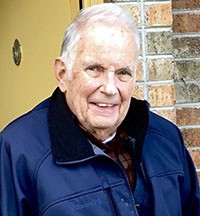 Harry was born in the Bronx to Morris and Pauline Ettinger, immigrants who came to America through Ellis Island. Harry graduated from Stuyvesant High School in Manhattan and earned both a Bachelor’s and Master’s degrees in Civil Engineering from City College of New York. He worked in the U.S. Public Health Service and the National Institutes of Health before moving to Los Alamos in 1961 with his wife June and his baby daughter Linda.

Harry worked at Los Alamos National Laboratory (LANL) for 36 years in the Health and Safety Group serving in a variety of positions from field industrial hygienist to acting deputy division leader. In the late 1980’s Harry and June spent two years in Washington D.C. while Harry was on temporary assignment with the Occupational Safety and Health Administration (OSHA) as the project director for OSHA’s effort to update Permissible Exposure Limits – safe exposure levels to protect workers across the United States.

Harry was a leader in his field and was active in professional organizations associated with industrial hygiene for many decades. He served as President and a Board Member of the American Industrial Hygiene Association (AIHA). He also served on the Boards of the International Society for Respiratory Protection, the International Occupational Hygiene Association, and the American Board of Industrial Hygiene; he was honored by these organizations and others with numerous awards. He was also a longtime editorial board member of many journals in his field. After retiring from LANL in 1997, he worked part-time as a consultant and remained active in AIHA. Harry enjoyed the friendship of his colleagues and is was proud of the accomplishments of the many individuals who worked with him at LANL.

In 2016, Harry moved to Albuquerque, but maintained his close connections with many friends and colleagues from his time in Los Alamos.

Harry was very proud of the accomplishments of his three children and two grandchildren. He guided each of them as a mentor and sounding board in their educational and professional journeys. Through his frequent phone calls, thoughtful cards, and loving support

his relationships with his children and grandchildren remained very close. Harry was preceded in death by his loving wife, June, and his daughter, Linda. He is survived by his son Steven, daughter-in-law Lainie, granddaughters Madeline and Grace, son Robert, and daughter-in-law Karen.

Funeral service will be held 2 p.m. Wednesday Dec. 14, 2022 at Guaje Pines Cemetery in Los Alamos. In lieu of flowers, contributions may be sent to the June and Harry Ettinger Memorial Scholarship, Friends of Mesa Public Library, Los Alamos.