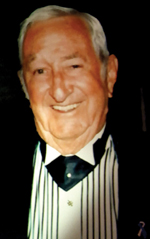 George F. Melton, age 85, passed away peacefully on September 8, 2016, after a long and difficult battle with dementia. A former resident of Los Alamos, George and his wife, Bobbi, lived in Peoria, AZ at the time of his death.

George F. Melton, Jr. was born in Carrizozo, New Mexico on April 10, 1931 to George F. Melton, Sr., and Frances Melton. After losing his father at an early age in 1935, George grew up on ranches in the Corona, New Mexico area where he attended schools in Corona, Alamogordo and Tularosa, New Mexico. He was very active in all sports during his high school years. He graduated from Tularosa High School in 1948.

George was preceded in death by his mother in 1968, older sister, Yvonne Brazel in 1994, and younger sister, Nanette Roberts in 2002.

In 1950, George enlisted in the United States Air Force and was honorably discharged in 1954. In January 1956 he went to work for the Atomic Energy Commission at Los Alamos as a Security Guard. In 1957, George began working at the Los Alamos National Laboratory where he spent the majority of his 30+ year career working at DP Site and at TA-55 as a Senior Technologist until his retirement in 1987.

George enjoyed boating and waterskiing with his family and friends on lakes around New Mexico. After their retirement from LANL, they became full time RVer’s, traveling the United States.

After settling down in Sun City, Arizona in 1995, they gave up RVing, and started traveling the world. They were blessed to be able to enjoy many trips abroad and many cruises enjoying ports of the world, which was George’s delight. In fact, George and Bobbi spent over 750 days at sea on their many cruise adventures.

In 2010, they moved into Sierra Winds Life Care Community in Peoria, AZ, where George resided in until his death.

George was a life member of Los Alamos Elks Lodge 2083. He served as Exalted Ruler in 1979-1980, as District Deputy Northeast District in 1981-1982 and was chairman of the Veterans Service Committee for New Mexico State Elks Association for several years.

George is survived by his loving wife, Bobbi of 59 years; his son, Dave, and wife, Shelly, of La Mesilla, New Mexico, and many nieces and nephews.

As he wished, George has been cremated and internment will take place at the Santa Fe National Cemetery in the spring of 2017.

In lieu of flowers, if you wish to make a charitable donation on George’s behalf, the family requests it be made to The Alzheimer’s Association (alz.org).