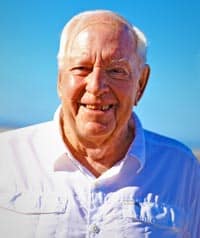 Butch was the first of 6 children and only son to Williard and Katherene Royer, born in Sturgeon Bay Wisconsin. His family moved several times, until settling on the “Hill” in Los Alamos, New Mexico.

Butch spent his high school years in the Secret City, then joined the Air Force where he served as a MP from 1959-1963. Upon the completion of his service, he returned to the Hill and began an extensive career, 39 years, at Los Alamos National Laboratory. Though his career spanned many operations, his expertise grew within the hazmat community. He has been recognized for his contribution in establishing this necessary program at the Laboratory as well as the development of a multi-agency training center for emergency responders. Butch participated in the annual hazmat challenge competition for the Laboratory, in which his team “won” several times.

Butch had an incredible drive for serving his community. During his employment at the Lab, Butch volunteered with the state of New Mexico’s Mounted Patrol for 18 years. Upon his retirement at the Lab, Butch and his beloved partner and best friend, Marcia Jones moved to Oro Valley to live out their retirement years in the sun. Yet, those years were hardly spent idle, Butch continued his love for community service by volunteering with the Oro Valley Police Department. In this he received recognition for his many hours of contribution to the community.

Butch did enjoy traveling and exploring with Marcia and his adventurous sister Mary. He was fond of cooking which his son inherited as well. This led to fun bantering for the rest of the family to watch as they both volleyed for lead cook in the kitchen during holidays and gatherings.

To his family, Butch lived an amazing life, though his family selfishly wished for more time with him, we know he will be joined by his Mother, Father, and youngest sister Linda on the other side.

The Family extends the invitation to his friends in joining us for a Memorial Service to be held at Vistoso Funeral Home in Oro Valley, Friday June 3 at 10 am. Butch will be laid to rest at a later burial service in Richland, WA.