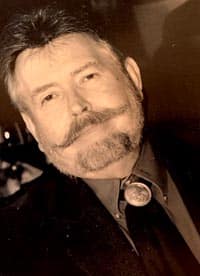 Gary L. Green, 77, of Albuquerque and formerly of Los Alamos, passed away peacefully with his family by his side on Saturday, March 5, 2022 after a brief illness.

He was preceded in death by his first wife Jan in 2002.

Gary lived a big life. He was an avid hunter (went on African safari twice), fisherman, master gunsmith, amazing story-teller, world traveler, motorcycle rider, movie buff (especially Westerns), and loving PaPa to his grandkids. While carrying a rough exterior – he was truly tender-hearted and loved his family and friends fiercely. He loved the Lord and had a heart for anything patriotic – especially our troops.

Gary was born October 31, 1944 in Glendale, California, the only child to Lloyd and Maude Green. At a young age the family moved to Detroit, Michigan where Gary spent his elementary, teenage and young adult years hunting and camping in northern Michigan. In high school he met his first wife Jan. They married in 1963 and raised three beautiful daughters. Gary was a machinist by trade and started his career with Ford Motor Company.

In 1980 an opportunity arose to come to New Mexico to work for the Los Alamos National Laboratory and so the family set out on a new adventure. Gary worked for LANL eighteen years before retiring in 1998. He enjoyed his time in Los Alamos camping, hunting, and fulfilling his dream of owning horses. In 1998 he and Jan moved to their lake house in Logan where they lived until Jan passed away in 2002.

Gary and his family were then greatly blessed when Margie came into their lives. She immediately embraced his daughters, became MiMi to the grandkids and brought such love and compassion to the family. Gary was also happy to have inherited two sons! They settled in Albuquerque and lived a full life with family and friends. They traveled extensively and were very involved with their Goldwing Group friends – going on rides, trips, and having late game nights. They loved spending time at the lake house with their close-knit “Lake Powell Group”.

Gary leaves behind a lasting legacy with all his loved ones. While he faced much adversity in his life, he was a fighter and remained strong until the end, a true man’s man who lived life on his own terms.

Cremation has taken place. A Celebration of Life is planned for Monday, March 21, 10:30am, at Tennis Club of Albuquerque (TCA) – 2901 Indian School Rd NE, Albuquerque, NM. Private interment will occur at a later date. In lieu of flowers, donations can be made in Gary’s name to the Wounded Warrior Project.  (https://support.woundedwarriorproject.org).