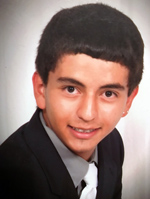 Frankie Martinez, 25, a resident of Dixon, passed away unexpectedly on Sunday, December 18, 2016.

He was a UNM graduate in Psychology and Communications. Frankie enjoyed fishing, camping, hiking, water activities and spending time with family and friends. He had a contagious smile and laughter, which always lit up the room.

Public visitation will begin on Tuesday, December 27, 2016 at 6:30 p.m. in the Sangre de Cristo Chapel of DeVargas Funeral Home & Crematory, with a memorial service to follow at 7:00 p.m. Funeral Service will be held on Wednesday, December 28, 2016 at 11:00 a.m. at the Embudo Presbyterian Church.

The family of Frankie E. Martinez has entrusted the care of their loved one to the DeVargas Funeral Home & Crematory of the Espanola Valley. 505.747.7477, www.devargasfuneral.com.