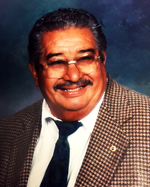 Frank Abeyta “beat the odds” until April 15, 2015 when he died peacefully at the age of 94 in Albuquerque, NM.

Frank was born in Parkview, NM on October 14, 1920 to Jose Amado Abeyta and Josefita Gomez Abeyta. He was one of eight children that grew up in northern New Mexico and southern Colorado.

After serving in the US Army during WWII he moved to Los Alamos where he was a driver for Zia Company. He met the love of his life, Ida Trujillo and they married in 1949. Frank and Ida honeymooned in Mexico City, which was uncommon at the time.

Frank then joined the Los Alamos Fire Department where he worked until his retirement in 1974 after achieving rank of Captain. After his retirement from the Fire Dept, Frank worked for LANL (as it was known then) for another eight years. He served on the Los Alamos County Personnel Board in 1971 and was active in many civic organizations including LULAC, The Knights of Columbus and the American Legion.

He lived in several places after leaving Los Alamos including Espanola, Alcalde, Los Lunas and finally Albuquerque. He made friends wherever he went. Frank loved his Cadillacs, of which he owned several before switching to Lincolns.

Frank was preceded in death by his wife of 31 years Ida, his parents, his brothers Gabriel, Charles and Marcos, his beloved sisters Louise Chavez and Sister Mary Rose, his grandson Warren Slough, and most of his close and very dear friends.

Thank you to the caring staff and residents at Las Colinas Village, and a special thank you to Bill Chavez’ family for all that you did for Frank, especially Deborah Chavez who gave her time and love so willingly. His children will always be grateful.

In lieu of flowers please make a donation to your favorite charity in Frank’s name. A memorial and celebration of his life will be held on Saturday, May 9, 2015 at French Mortuary 10500 Lomas Blvd NE, Albuquerque, NM 87112 at 1:00. All are welcome. Bring stories to share.