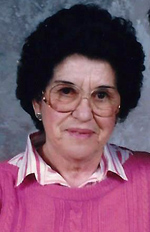 Felonis Martinez, a resident of Vadito, NM was called home to be with our Lord and Savior on December 22, 2016.

Felonis  Martinez was born on September 12, 1925 to Procopio and Cornelia Mascareñas in Rodarte, NM. Felonis was the oldest of six children. She loved all her brothers and sisters whom she also helped to care for and raise.

Felonis graduated from the Peñasco Independent School District and went on to attend college at Adam’s State University in Alamosa, CO. It was there that she met her husband Abel E. Martinez. They were married on November 27, 1947.

Felonis worked for the Taos County Clerk’s office before going on to become a teacher. She taught elementary in Rodarte, Llano San Juan and for the Catholic School in Peñasco. In 1950 Felonis gave birth to her son Abel Jr., and left her teaching career to raise her family.

Felonis enjoyed cooking, gardening and sewing. She always loved cooking dinner for her family and being able to talk about how everyone’s day was. She had a very green thumb and everything she planted always flourished.

Felonis also helped raise and care for her two grandchildren whom she dearly loved. She is preceded in death by her loving husband of 69 years Abel E. Martinez Sr., her parents Procopio and Cornelia Mascareñas, and brother Procopio Mascareñas Jr.

Public visitation will begin on Wednesday, December 28, 2016 at 5:00 p.m. at DeVargas Funeral Home & Crematory, with a rosary to be recited at 6:00 p.m. Mass of Christian burial will be celebrated on Thursday, December 29, 2016 at 11:00 a.m. at San Antonio de Padua Catholic Church in Peñasco, with a burial to follow at 3:00 p.m. at the Santa Fe National Cemetery with the following serving as pallbearers, Clarissa A. Martinez, Isabelle Martinez, Kim Martinez, Charlotte Trujillo, Jane Gonzales-Vigil and Eva Salazar.

The family of Felonis Martinez has entrusted the care of their loved one to the DeVargas Funeral Home & Crematory of the Espanola Valley. 1.505.747.7477, www.devargasfuneral.com.