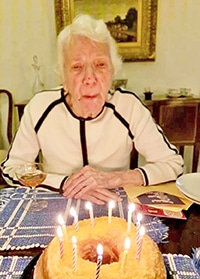 Betty completed her undergraduate degree at Randolph-Macon Woman’s College in Lynchburg, Virginia. She went on to complete her Master’s degree in nursing from Yale University in New Haven, Connecticut where she met her husband of 63 years, Walter F. Huebner.

Betty spent her professional career as a nurse in Los Alamos. She worked at Los Alamos Medical Center for several decades and then became the public health nurse for Los Alamos and Rio Arriba counties in New Mexico.

Walter preceded her in death. Betty is survived by her 4 children and their spouses, Anne Rice and Tom Edwards, Pieter and Sheila Huebner, Lisa Huebner, and Rich and Robin Huebner. She enjoyed the companionship of her five grandchildren, Silvio, Emil, Petra, Kristen, and Justin.

A celebration of life service to be announced at a later date.

In lieu of flowers, donations can be made to the: