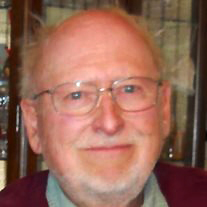 EDWARD R. SHUNK May 22, 1933 – July 10, 2014
After a brief illness, long time New Mexico resident, Edward “Ed” Shunk, stepped across, embraced into God’s peace and radiance, surrounded by his family. Born in Livingston, Mont., Ed obtained a degree in Engineering Physics from Montana State University.
While working for RCA in Philadelphia, he off-handedly answered an ad in a physics journal culling for a mysterious place called Los Alamos. Thus, the newly minted physicist entered into the vast realms of Cold War Nuclear Physics.
He began his 44 year Los Alamos career with converting standard munitions, such as artillery and mortar shells, into nuclear-capable weapons. After an injury on a firing range, Ed turned to the Crock-Croft Walton Accelerator; en route to a Master’s degree doing neutron cross sections. This sealed his true oeuvre’: the intricate technical craft of making detectors for both above and below ground nuclear testing in Nevada. This evolved into Ed’s working with critical assemblies for Q Division. His ultimate favorite, however, where he finished out his Los Alamos career, was making detectors for Mars probes.
His engineering skills were superlative, of the highest level; yet at the same time he possessed a deep simple, yet complex, wonder and awe about and for anything in the physical world; rainbows, sundogs, halos. All ranges of atmosphere optics were a passion.
Avocations were bicycling, hiking, rock-hounding, and petroglyphs. He was a life-long, master airplane modeler. Always humble, understated; he was crazy-smart, yet possessing the common touch; the physicist can dream it, but someone has to make/machine it. His character was that rare, wonderous meeting of awe and amazement/the spiritual with the physical world, making things that in turn, reveal the wonder and awe.He will be sorely missed.
He enjoyed an active retirement with his wife, Constance, in Tijeras, outside of Albuquerque. He was preceded in death by his first wife, Joann, and son, Edward Jr. He is survived by his daughter, Katherine, and sons, Carl and John, all of Denver, Colo., and acquired daughters, Deborah of Sacramento, Calif., Lezlie of Indianapolis, Ind., Kathrine of Santa Fe, N.M., Cara, of Kennewick, Wash., and Amanda of Saratoga, Calif. He also leaves numerous grand and great grandchildren.
Memorial and interment will be at a later date at Guaje Pines Cemetery in Los Alamos. Donations/ gifts in memorial, may be made to the Juvenile Diabetes Foundation, 2501 South Pedro NE, Suite 116, Albuquerque, NM 87110.
Menu
LOS ALAMOS