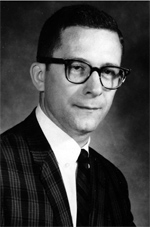 Edward J. Dombrowski was born as the first of eight children to Anthony and Josephine Dombrowski in Bridgeport, CT, on January 10, 1930. He passed away on Sunday morning September 25, 2016, at Sombrillo Skilled Nursing & Rehabilitation Center in Los Alamos, NM.

He joined the Marine Corps after high school and rose to staff sergeant over the next few years. He left the Marine Corps, married Patricia C. Rimkunas with whom he had five children. During that time he worked at Underwood Corporation and went to night school for a mechanical engineering degree.

Once he had that degree he worked in business machine design and development for business leaders such as Friden and the Sweda Division of Litton. He was site selection manager for a new Singer Company Business Machines facility in the Southwest and met Albuquerque Commission Chairman Pete Domenici before selecting Albuquerque as the site of the new 100,000 square foot plant. He ended his corporate career as head of a 3,000 person international engineering organization at Pitney Bowes, the mailing machine manufacturer.

In retirement he ran a  building supply business, did engineering consulting and taught manufacturing technology classes at Doña Ana Community College in Las Cruces, NM. He enjoyed woodcarving for over forty years. He was a member of the Phoenix Woodcarvers Club, the founder of the Doña Ana Woodcarvers Club, and taught a woodcarving class at Barranca Mesa Elementary School. His woodcarvings have been displayed at the Las Cruces library.

Ed is survived by Patricia Dombrowski, his wife of sixty-two years, and his children David (wife Maureen), Duane (wife Janice), Dana and Diane. He was predeceased by his son Dennis. His other survivors include grandchildren Jessica O’Connor (husband Adam), Joshua Dombrowski, Nathan Dombrowski, Emily Dombrowski, Elizabeth Dombrowski and Justine Dombrowski. His great grandchildren are Alexis and Kaitlynn O’Connor.

The family thanks the staff of Sombrillo Skilled Nursing & Rehabilitation Center for their kind and caring support for Ed during his stay with them and especially in the final days of his life.