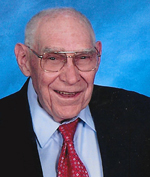 Doyle Wayne Rottmayer passed away peacefully at his home surrounded by his family and friends on Sunday, September 13, 2015.

He was preceded in death by his first wife Dorothy May, his second wife Jeri; and his brothers Kernie and Dee.

Doyle was born March 12, 1927 in Beaver County, Oklahoma where he grew up. After competing his high school education, he went into the military at the close of World War 2 and was a part of the occupation force in Japan. After his discharge from the military, he attended what was then Oklahoma A and M University in Stillwater, Oklahoma. He married Dorothy Williams September 21, 1950. He completed a bachelor of science in Civil Engineering in 1951. Their daughter, Kay Margaret, was born in 1951.

Doyle’s first wife, Dorothy, suffered a debilitating stroke in 1971. Doyle was her primary caregiver until her death in 1985. Doyle married Jeri Guinn in 1986 and they enjoyed 19 years of marriage.

His retirement was filled with fishing, hunting, traveling, and church work. He attended many baseball games and ballet recitals in order to watch his great-grandchildren. Doyle was a charter member of the Los Alamos Church of Christ and was an active member, serving in multiple capacities, until his death. Doyle was a kind and gentle man who loved to laugh and tell jokes. Those who knew and loved him will miss him very much.

The family wishes to thank the Los Alamos Visiting Nurse Service and A Nurse in the Family for their outstanding care of Doyle.