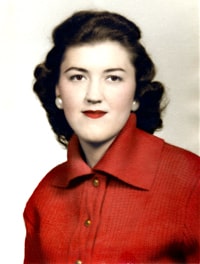 She was born in Cameron, Texas on February 15, 1933, to Thomas Watson Batey and Annie Floyd Day. She graduated from Yoe High School of Cameron and later received her B.S. from the University of Texas at Austin in Elementary Education.

She married Roy Samuel Baty, Jr. on July 30th, 1955, at the University Methodist Church in Austin, and celebrated 66 years of marriage with him. In her early adult life, Dorothy was an elementary school teacher before becoming a dedicated mother and later a grandmother.

Dorothy was passionate about many activities which included gardening, sewing, traveling, and participating in the Officer’s Wives’ Club. Often, she would spend hours nurturing her tomato plants and roses or working on sewing clothes and blankets that are still being used by her family today.

She was famous for putting together incredible meals for holidays and entertaining, with leftovers being a rare occurrence. She prided herself on maintaining an impeccable household and flower garden. Most importantly, she was a loving wife, mother, grandmother, and aunt to every member of her family.

Dorothy is survived by her loving husband, Roy Samuel Baty, Jr.; her devoted sons Roy Stuart Baty (Joanne) of Los Alamos, New Mexico, Reid Samuel Baty (Richard) of Salt Lake City, Utah; and her grandchildren Samuel Roy Baty and Sarah Marie Baty both of Los Alamos, New Mexico. She is also survived by her nephew Thomas Young (Lindsey) and family of League City, Texas, and her niece Anne Giddings (John) and family of Round Rock, Texas. Dorothy was preceded in death by her infant daughter Kathy Lynne, her parents Thomas and Annie Batey, her brother Thomas Batey, and her sister Kathryn Young. Dorothy will be greatly missed by all who knew her and will be forever loved by her family.

A graveside service will be held at the Fort Sam Houston National Cemetery in San Antonio, Texas on Thursday, July 21st, 2022, at 11:00 am Central DST. The pallbearers are Roy Baty, Reid Baty, Samuel Baty, and Richard McAllister. The honorary pallbearers are Sarah Baty, Thomas Young, and Anne Young Giddings.