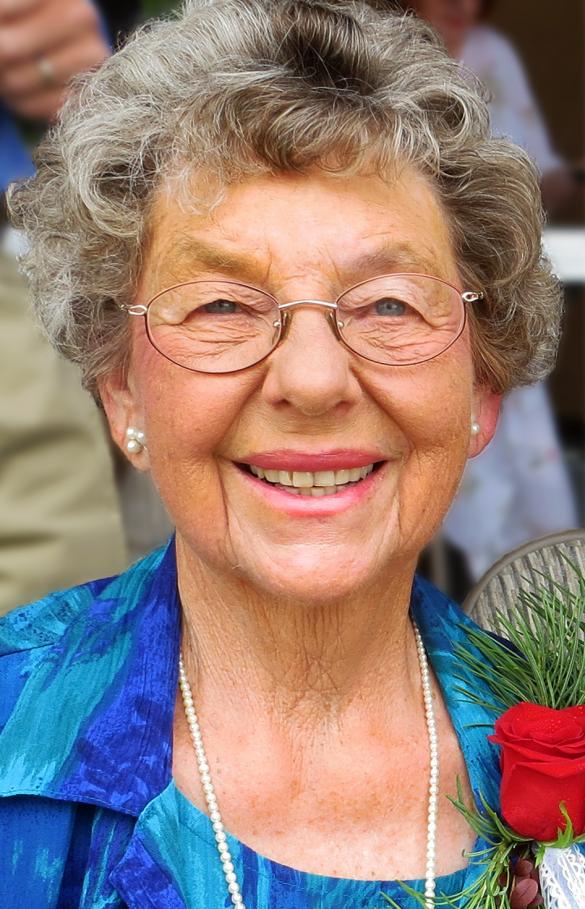 Dorothy was born in the small farming community of Casey, Illinois and received her R.N. in Nursing from Union Hospital in Terre Haute, Indiana. She moved to Colorado and attained a B.S. in Nursing from the University of Colorado in 1959.

While at CU-Boulder, Dorothy worked at a boarding house where she met Ted, her late husband of 51 years. Ted frequently described how he would have meals at the boarding house and enjoy flirting with all the girls during his visits over coffee. But, when he wanted to have a quality conversation, he always found himself talking with Dorothy during the main course. They were married in 1959, and, after a short time in Las Vegas, Nevada, moved to Los Alamos in 1960.

During her 36 years as a local nurse, Dorothy worked in several clinical capacities, but she was especially fond of her role in obstetrics, caring for many, many Los Alamos mothers and newborn “babes.” She also advocated for the nursing profession as a legislative consultant and lobbyist for the New Mexico Nurses Association. As the President of the New Mexico Nurses Foundation, she worked to expand their goal of providing nursing education scholarships. Dorothy received many recognitions for her lifelong efforts in support of nursing, including the March of Dimes Legends of Nursing award in 2003.

For over 50 years, Dorothy was an active member of the United Church of Los Alamos. She held roles from Sunday school teacher, camp nurse, and youth group leader to grief support group facilitator, elder, and executive board president. She especially enjoyed retreats at Sonlight Camp in Pagosa Springs, Colorado, where her love of mountaintop beauty, Christian fellowship, and chocolate chip cookies were all embraced.

Dorothy was also involved with the local and state Garden Clubs. She was introduced to her passion for floral design by her mother-in-law, Mary Crawford, a founding member of the Summit Garden Club. Although she appreciated gardens and the skills of her friends who were gardeners, she was adamant that her gifts were not in gardening, but in arranging flowers. She excelled at floral design, winning several awards for her arrangements in competitions around New Mexico. Her arrangements were often unconventional, including rough steel sculptures welded by Ted. She used these skills and passion to coordinate the flowers for the worship services at the United Church.

Dorothy was an adventurous soul who loved spending time in the mountains and skiing—her move from Illinois to Colorado was less about nursing than an unfulfilled desire to become a “ski-bum.” She loved the outdoors; camping, as long she didn’t have to sleep on the ground; and picnicking near water. She was an avid football fan who would have one game on in the living room and another in the kitchen, and often planned holiday meal gatherings around them.

In their retirement years, she and Ted enjoyed traveling to places such as Scotland and Austria, making many SCUBA trips to Mexico, and driving 10,000 miles in their RV to Alaska and back with their dog and cat. While at home, she enjoyed her morning coffee on her plant-filled patio, sharing conversations with good friends, and watching the sun rise over the Sangre de Cristos while the native birds ate from her many bird feeders.

She and Ted nurtured three children who were all raised in Los Alamos. As a testament to Dorothy’s giving spirit, all three have successful careers contributing to the safety and health of the world. She was a steadfast supporter of her grandchildren, making special efforts to participate in their school activities and to visit all of them each year, despite their locations across the country.

She had a gift for acceptance and forgiveness of others and lived her life through her deep faith.  Dorothy found her strengths and bravely answered callings early in her life. And, by doing what came naturally to her, she made enormous contributions to enhancing life in Los Alamos. The outpouring of love and support from the community since her passing is a testament to the impact she had on those around her. She will be greatly missed.

She was an only child and was preceded in death by her parents, Charles and Helen Baird, her husband Ted Crawford, and infant grandsons Nathan and Zachary Crawford.

She is survived by her daughter LouAnn (Crawford) Burnett, husband Doug, and granddaughter Elena of Albuquerque, NM; her son Mark Crawford, wife KayLinda, and granddaughters Megan and Natalie of Los Alamos, NM; and her son Matt Crawford and grandsons Maceo and Quincy of Arlington, MA.

A celebration of Dorothy’s life will be held at The United Church of Los Alamos on Saturday, December 22 at 1:30 p.m.