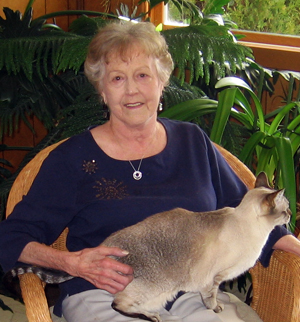 Donna Hill died peacefully on May 31st, 2014 after many years of illness. Donna Marie Lord was born to J. Donald and Agnes Lord on January 6, 1931 in Ellsworth, Maine. She attended the University of Maine and what is now Husson College where she obtained an RN degree. Donna served at Eastern Maine General Hospital as Head Nurse on the surgical ward.

She married her husband, George Hill, in 1952 and supported him for his last two years in college. They lived in St. Albans, West Virginia for eight years and then moved to Los Alamos, New Mexico in 1962.

Donna loved flowers and gardening, even serving as president of the Summit Garden Club. She also had a passion for equestrian activities. In the 1960’s-1980’s, Donna was involved with the Los Alamos Sheriff’s Posse and drill team, along with being a co-chair of the annual Los Alamos horse show.

She was a beloved member of the Los Alamos community and will be greatly missed. Of all the roles and titles Donna held, the most important and cherished were those of a wife, a mother, a grandmother, and a great-grandmother.

Donna was preceded in death by her mother and father and her daughter Kathryn (Kathy) Matzke. She is survived by her brother, Gerald Lord and his wife Jane of Surry, Maine; her husband of 62 years, George Hill; her son, David Hill; her son-in-law, James Matzke; her granddaughter, Shannon Blaylock and her husband, Joe; her grandson, Kevin Matzke and his wife, Cristina, of San Diego, CA; her granddaughter, Kelly Matzke; her great-grandsons, Jackson and Jase Blaylock; and countless friends.

Per Donna and George’s wishes, a private graveside ceremony will be held for family and close friends. In lieu of flowers, the family requests contributions be made to Doctors Without Borders, St. Jude’s Children’s Hospital, or the charity of your choice. Funeral services by DeVargas Funeral Home of Espanola, NM.