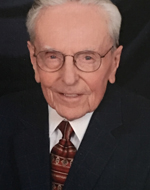 Born in San Francisco in 1926 to Guy and Edith Cochran, Don went on to serve the US Navy from 1945-1946, obtain a degree from U.C. Berkeley in 1948, and finish his PhD in Physical Chemistry from Johns Hopkins University in 1954. He moved to Los Alamos, NM in 1954 where he worked for the Los Alamos National Laboratory for 36 years.

Highlights of his career were, in chronological order, working in the cyclotron group, performing a high altitude test series, working on the Mossbauer Effect, and aiding in the design and construction of the medium energy accelerator facility. Don worked at the Meson facility until his retirement in 1990.

While his work was his passion, he was equally dedicated to his family. In 1960 Don married Joan Warren. They built a beautiful home in New Mexico with a stunning view of the Jemez Mountains. Don spent most of his spare time meticulously maintaining a lovely landscape, which isn’t easy in the arid climate!

They were blessed with three wonderful children: Jim Cochran, Robert Cochran, and Marcia Cochran Mahoney. He had a continuing and active interest in all of his children’s extracurricular and sporting events. His children fondly remember him cheering in his deep booming voice and whistling loudly in celebration.

Don continued this same level of dedication toward his grandchildren starting with being there for their births. He often went to Denver to visit Jim and Katie’s children, Garrett, Courtney and Chandler; to Florida, Bogota, Columbia and Maryland to visit Robert and Olga’s children, Brianna and Brandon; to Illinois and Massachusetts to visit Marcia and Bob’s children, Rachel and Brendan. He went to many grandchildren activities, which included sitting in the cold to watch sporting or marching band events, graduations, and attending any family event possible. He made everyone feel special by remembering the details of their lives. Don was a gracious host and a consummate gentleman.

All who have met him remember him as a friendly, caring, sensitive and supportive person with a strong connection to his family and friends, deep level of intelligence, and kind demeanor. He was the family rock and will be missed. For the past 8 years, Don and Joan have lived in Colorado where they have made many great friends.

In lieu of flowers, donations may be made in his name to the COPD Foundation: http://copdfoundation.donordrive.com/campaign/DonaldCochran.

Condolences can be made online at www.EllisFamilyServices.com. Visit Mr. Cochran’s Tribute Wall.