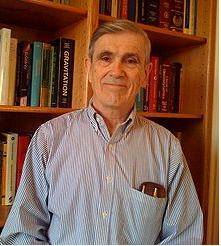 World-renowned astrophysicist Dimitri Mihalas passed away in his sleep at his home on November 21, 2013 in Santa Fe, New Mexico.

Dimitri was born on March 20, 1939 in Los Angeles, California where he grew up. He received his B. A., with Highest Honors, in three majors: Physics, Mathematics, and Astronomy from the University of California at Los Angeles at age 20. Four years later he received his Ph. D in Astronomy and Physics from the California Institute of Technology. He then joined the faculty of the Department of Astrophysical Sciences at Princeton University.

In the following three decades, he was a professor in the Department of Astronomy at the University of Chicago, the University of Colorado at Boulder, and the University of Illinois at Urbana-Champaign. He was also a pioneer in astrophysics and computational physics and remained a world leader in the fields of radiation transport, radiation hydrodynamics, and astrophysical quantitative spectroscopy for most of his career. His broad knowledge and immense contributions earned him election to the U.S. National Academy of Sciences in 1981 (at age 42, fifteen years earlier than the usual age of entry) and many other distinguished awards. He was a laboratory fellow at the Los Alamos National Laboratory.

Dimitri had an exceptional record of both quantity and quality of work, and developed new and far-reaching methodologies yielding results of great importance. He made outstanding contributions to the field of Astronomy and Astrophysics. Besides many high-quality papers, he authored or co-authored seven books and co-edited three others. Among them, three of his books have been used as textbooks for both undergraduate and graduate students worldwide and translated into other languages such as Russian and Chinese. His book Foundations of Radiation Hydrodynamics has become the “bible” of the radiation hydrodynamics community, especially at Los Alamos and Lawrence Livermore National Laboratories and the Naval Research Laboratory.

Dimitri’s colleagues and graduate students held him in high appreciation and expressed their admiration for him at the International Conference in Honor of Dimitri Mihalas for his Lifetime Scientific Contributions on the Occasion of his 70th Birthday held at Boulder in late March 2009. A symposium was published following the conference.

Throughout his long career, Dimitri gave generously of himself to all with whom he interacted. As an advisor, role model, confidant, and friend, he saw each person as an individual, acknowledging strengths, helping overcome weaknesses, giving encouragement, and enthusiastically praising their success. He touched the lives and careers of many students and colleagues and has left a lasting legacy to be cherished by those who knew him.