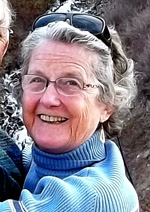 Diane Petersen Peters was born in California on September 2, 1942 to Leonidas and Beverly Petersen. She attended the University of California at Berkeley where she earned a degree in Chemistry and met the love of her life. Richard and Diane moved to Los Alamos, NM in the fall of 1972 where Diane quickly became an active volunteer in the community.

Diane had a gift for serving and comforting those who were overlooked or struggling. She led Girl Scout troops from 1972-1994, taking groups of high school girls to Mexico and Switzerland. For many years she owned an upholstery business called “The Great Coverup” and donated her time and talent to the YMCA and LAHS by re-covering their weight benches. Later she was the principal and science teacher at Covenant Christian School from 1980-1998 where she lived her dream of helping middle school and high school kids achieve their potential.

She was an active member of Bryce Avenue Presbyterian Church and later the Christian Church in Los Alamos where she led youth education and was a member of the choir. Diane was an avid and adventurous world traveler who simply loved to “go” and never met a stranger who didn’t become a friend. Diane was a dedicated and loving wife, mother, daughter, sister, and grandmother. As Alzheimer’s disease slowly stripped her away bit by bit, the core of her character continued to shine through. She always believed that forgiveness was free, love was limitless, and family was the greatest asset we have.

We are grateful to those friends who stood by our family through this difficult journey. The Visiting Nurses of Los Alamos offered exceptional compassion and guidance as we navigated this trying time. Diane will be remembered for her perpetual optimism and her ability to see the good in everyone.

A memorial service will be planned at a later date. In lieu of flowers, donations can be made to the Fisher Center for Alzheimer’s Research Foundation (http://www.alzinfo.org/) or the Girl Scouts of the USA.

The family of Diane Peters has entrusted the care of their loved one to the DeVargas Funeral Home & Crematory of the Espanola Valley. 505.747.7477 – www.devargasfuneral.com.