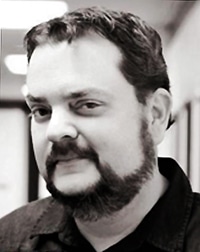 David was born on August 23, 1972 in Brunswick, Maine to Richard (Dick) and Elizabeth (Betty) Danforth.

David moved to Los Alamos, NM with his family in 1977 and graduated from Los Alamos High School in 1991. He completed his Bachelor of Science in Journalism from Eastern New Mexico University in 1997.

He married Meridith McLarty in 1997, and they moved to Mesquite, TX that same year.

He worked as a photojournalist for several years, then found his first job in education at Collin County Community College. He became a Program Coordinator at Eastfield College in 2001 and taught digital media there for almost 20 years.

David is survived by his daughters, Sidney (22) and Savannah (18); his father, Richard, and stepmother, Patty Danforth of Sandia Park, NM, his brother, John of Los Alamos, NM, his brother James in Fort Collins, CO, and his stepfather Barry Bryan of Carrollton, TX.

He was preceded in death by his mother, Betty Bryan.

No services will be held, but those who wish to remember David are asked to make a donation to the general scholarship fund of Eastfield College in his name.

His wishes were to have his ashes spread on the beach and into the water off the point at Pemaquid, Maine to eventually join his mother, father, stepfather and brothers.