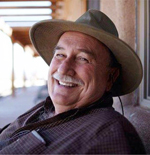 David Bruce Holtkamp departed this life on June 16, 2017 in Aurora, Colorado surrounded by his wife, Irma, their children, David Michael (Michele) and Kathryn Alicia “Katy” (Michael) and his dear friend and colleague Jeremy Payton. He was born on April 16, 1954 in Beaumont, Texas to William Edward and Betty Joyce (Hundley) Holtkamp, Jr.

David and Irma came to Los Alamos, NM in January of 1979 and have lived there for all but one year since then. They celebrated their 40th wedding anniversary on May 28.

David is preceded in death by his parents and father-in-law, Fidelio G. Salinas. He is survived by his son, David Michael and wife, Michele, of Los Alamos and their children, Sebastian and Ruby; daughter, Kathryn Alicia and her husband, Michael, of Maui; brother, Bill (Linda) of Austin, TX; sister, Katy Windsor of Beaumont, TX; mother-in-law, Alicia G. Salinas, sister-in-law, Alma (Tom) Garcia, brothers-in-law, Fidelio Salinas Jr. and Hector (Tabitha) Salinas; many nieces, nephews and cousins; and by his beloved uncle, C.J. Holtkamp.

David’s career at Los Alamos National Laboratory spanned many areas including medium and high energy physics, advanced accelerator design, volume imaging LIDAR systems, Photon Doppler Velocimetry, Strategic Defense, fundamental and applied research in shock wave physics and equations of state, and he helped with many scientific and National Security challenges. He always said about work and personal life that it was most important to “do the right thing even if it is hard.” He liked to tell people that he was “the luckiest guy at the Lab because I get to work with some of the smartest and most creative people in the world solving difficult problems.” He was a natural born teacher, lifelong learner, and a true “Renaissance” man who delighted in reading and discussing the arts, society and cultures, all the sciences, and politics.

A memorial service to celebrate David’s life will be held on Saturday, June 24th from 1-4 p.m. at Camp May (near the Los Alamos Ski Hill). The family requests donations to the American Heart Association or the charity of your choice in the name of David Bruce Holtkamp.