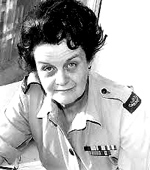 Clare Hollingworth died Jan. 10, 2017 in Hong Kong at the age of 105. She was an English journalist and author who was the first war correspondent to report the outbreak of World War II, described as “the scoop of the century”.

As a reporter for The Daily Telegraph in 1939, while travelling from Poland to Germany she spotted and reported German forces massed on the Polish border; three days later she was the first to report the German invasion of Poland.

Hollingworth was born in Knighton, a southern suburb of Leicester, the daughter of Daisy and Albert Hollingworth. During World War I, her father took over the running of his father’s footwear factory, and the family moved to a farm near Shepshed. She showed an early interest in becoming a writer, against opposition from her mother, and her interest in warfare was stimulated by visits to historical battlefield sites in Britain and France with her father. After leaving school, she attended a domestic science college in Leicester, which she did not enjoy.

Hollingworth had been working as a Telegraph journalist for less than a week when she was sent to Poland to report on worsening tensions in Europe. She persuaded the British Consul-General in Katowice, John Anthony Thwaites, to lend her his chauffeured car for a fact-finding mission into Germany. While driving along the German–Polish border Aug. 28, 1939, Hollingworth observed a massive build-up of German troops, tanks and armoured cars facing Poland, after the hessian screens concealing them were disturbed by wind. Her report was the main story on the Daily Telegraph’s front page on the following day.

She continued to report on the situation in Poland, and in 1940, by then working for the Daily Express, went to Bucharest, where she reported on King Carol II’s forced abdication and the ensuing unrest. Her telephoned reports ignored censorship rules and she is reported to have once avoided arrest by stripping naked. In 1941 she went to Egypt, and subsequently reported from Turkey, Greece and Cairo. Her efforts were hampered by the fact that women war correspondents did not receive formal accreditation. After Field Marshal Bernard Montgomery took Tripoli in 1943, she was ordered to return to Cairo. Wishing to remain at the front lines, she went on to cover General Dwight D. Eisenhower’s forces in Algiers, writing for the Chicago Daily News. She subsequently reported from Palestine, Iraq and Persia. During this time she became the first to interview the Shah of Iran.

In 1962 Hollingworth won Woman Journalist of the Year for her reporting of the civil war in Algeria (Hannen Swaffer Awards, UK). She won the James Cameron Award for Journalism (1994). In 1999, she received a lifetime achievement award from the UK television programme What the Papers Say. In 1982, she was made Officer of the Order of the British Empire for services to journalism.