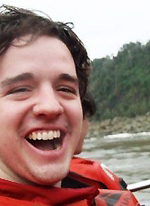 Chris was born January 23, 1984 in Los Alamos, New Mexico, where he grew up playing soccer, baseball, swimming, diving and becoming an accomplished drummer in his high school marching band. He graduated from Los Alamos High School in 2002.

Before graduating from the University of New Mexico, he spent half a year living in Buenos Aires, Argentina and exploring South America while becoming fluent in Spanish.

He loved spending time in the mountains and joined his brother David in Utah about five years ago, where he became a snowboarding instructor at Solitude Mountain Resort and a server at Desert Edge Pub & Brewery. His many interests included golf, skateboarding, music and his two adopted cats.

Chris cared deeply for his friends and family, especially his nieces Abby Brown and Imogen Watson. He brought out the best in people and left a mark on every life he touched.

He is survived by his parents, William and Elaine Watson of Los Alamos, NM; and his sister Kitty Brown (Chris) of Fort Collins, CO; and brother David Watson (Lindsay) of Salt Lake City.

A Memorial Service and Celebration of Life will be held for Chris at the White Rock Baptist Church at 80 State Road 4, White Rock, NM at 2:00 PM on Saturday August 1, 2015.