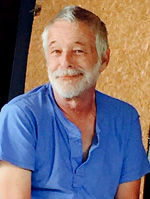 He was born on June 7, 1959 in the Bay Area of northern California. Brian lived the life. He was a passionate mountaineer, rock climber, and loved backpacking and summiting the beautiful mountains of New Mexico. In 2001, alongside his youngest son Jesse, he summited the tallest peak in Colorado, Mt. Elbert and it was one of his happiest moments.

He was also an avid NASCAR fan who never missed a Sunday race. He loved to cook, and his favorite meal was homemade spaghetti, which he passed down to his sons.

Brian was a loving father to his 3 kids and grandfather to his 4 grandchildren. He was a proud member of the Los Alamos Little League board working as the field manager in the 1990s and even managed his sons’ Majors team to an undefeated 18-win season in 1996. His love for baseball and teaching kids the fundamentals of the game was one of many passions.

Brian took pride in working for TRK Management where he spent 13 years as property director; a lot of his buildings are still in operation in Los Alamos today. He was a jack of all trades and could fix anything, he was an everyday MacGyver.

In 2004, he and his daughter Brianna left Los Alamos to fulfill a lifelong dream of living on a ranch in Texas. In 2013, he was forced into early  retirement after being diagnosed with kidney cancer and kept to himself in his last years. In the spring of 2015, he moved back to the town he always called home, Los Alamos, to live his final year and a half with his sons and 4 grandchildren.

A celebration of life is scheduled for 11AM Sunday July 10 with a memorial picnic at Jemez Falls Pavilion. Any who wish to participate can arrive at 9:30 A.M. for a memorial hike to the falls beforehand. In lieu of flowers donations can be made to Brian’s favorite charity, St. Jude’s Children’s Research Hospital, at www.StJude.Org.