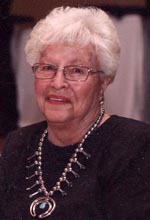 Her memorial service will be held on Tuesday, June 20, 2017 at 10:00 am at Central Church of Christ with Pastor Lyle Hinebauch officiating. Cremation was held and there will be no visitation. Memorials may be given to the Central Church of Christ for the use in the Mission Programs. Tributes of sympathy may be left at www.geringchapel.com. Gering Memorial Chapel is in charge of arrangements.

Bonny was born a twin on March 1, 1932 in Gering, Nebraska to Marvin and Beulah (Hedrick) Ewing. She and her twin sister Betty were baptized January 1941 at the Central Church of Christ. She lived on a farm until 1940 when her parents moved to Gering. She attended Carter Canyon School through grade’s K-3rd grade and attended the Gering Public Schools through graduation. She worked for Panhandle Co-op in Scottsbluff until her marriage to Darrell L. Ingwerson December 27, 1950.

They lived in Denver, Colorado and Culver City, California. She worked for American Greeting Card Company and was on the People are Funny Radio Show with Art Linkletter in 1952. They moved to Lincoln, NE after Darrell was discharged from the Air Force in 1954, later Los Alamos, New Mexico in 1956.

Bonny worked for the Los Alamos Public Schools System from 1964-1982 as a Substitute Teacher and Elementary School Secretary. Bonny was active in Bowling League for 20 years, Los Alamos Christian Church and Square Dancing while in Los Alamos. Darrell and Bonny retired to Gering in 1984 and built a house on part of the Ranch that her Grandfather had homesteaded in 1910.

She was a member of the Central Church of Christ, on the Oregon Trail Days Old Settlers committee. She was elected Vice President of Old Settlers in 2015. Bonny enjoyed being with her family and spending time on her hobbies of Doll Making, Quilting, her Grandchildren, yard, her husband and their Church family.