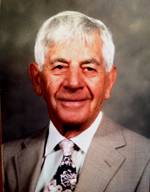 On September 12, 2015, Bert Tiano passed away peacefully after a vibrant 99-year life.

Bert was born on August 26, 1916, in Berwind, Colorado. He was the seventh of nine children born to Antonio Tiano and Elisa Della Valle. All through his life he was extremely close to his siblings. He was preceded in death by Joe, Rose, Mary, Tom, John, Beth, and Joyce; his sister, Virginia Flores, lives in California.

Bert moved to Santa Fe as a child, and completed high school there, although he spent much of his spare time at the pool hall where he would hustle all the old-timers. After high school he held various jobs, including working alongside his older brother, Joe, as a salesman for the Charles Ilfeld Company.

He enlisted in the Army Air Corps on December 8, 1941, one day after Pearl Harbor. He served in the Pacific Theater as a member of the 11th Replacement Control Depot, working his way up to Sergeant, and participating in the East Indies, Guadalcanal and New Guinea campaigns. He received a Good Conduct Medal, American Defense Service Medal, and the Asiatic Pacific Service Medal with 3 Bronze Service Stars.

Upon returning to the States, Bert was assigned to duty at the Japanese internment camp in Santa Fe, where his compassion for humanity enriched many lives.

After being discharged from the Army, Bert went into the sporting goods business with his brothers, John and Joe Tiano. In 1948, Bert applied for and received a merchant license to open a branch of Tiano Sporting Goods in Los Alamos, making him the second person to be licensed to do business in the community. Tiano Sporting Goods and Bert were an integral part of Los Alamos and its people. They bought all their hiking, hunting, fishing, and skiing gear from Bert until he retired in 1978.

He was married to the love of his life, Lynnda Landon Thompson Tiano, for 28 wonderful years after a romantic courtship that lasted 13 years. Bert was a devoted father to his two children from a previous marriage, Dr. Susan Tiano of Albuquerque and Bert Tiano Jr., who preceded Bert in death in 2002.  He was also an excellent father to Lynnda’s two children, Byron Thompson of Picayune, Mississippi, and Elizabeth Thompson Firenze of Boston, Massachusetts. As a grandfather, “Papa” was delighted by his grandchildren–Courtney, Chase, and Morgan Thompson, and MJ and Ryan Firenze.

Bert loved the outdoors and was particularly fond of hunting, fishing, water skiing, and snow skiing. As a self-taught inventor, tinkerer and fixer-upper extraordinaire, he found many treasures at garage sales, flea markets, and junkyards. He loved to dance, bake pecan pies, make red chili enchiladas, and watch Lawrence Welk on Saturday night. He made friends with everyone he met and entertained them with his stories, jokes, and good-natured ribbing. He was a great teacher–patient, kind, and genuine. An accomplished man in many facets of life, his heart touched all who had the pleasure of knowing him.

A memorial service will be held on Saturday, October 3, 1:00 pm at Guaje Pines Cemetery followed by a reception at Bethlehem Lutheran Church.