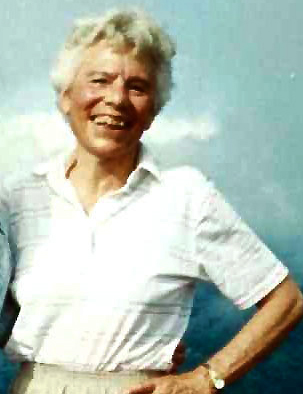 Beckie (Bradford) Diven was born in Globe, Arizona, in 1918 and died in Albuquerque, New Mexico June 17, 2014. She was raised in Pasadena, California, and worked her way through college as a camp counselor in the Sierra Nevada Mountains and loved the outdoor life.

After graduation, she worked at Caltech. While there, she helped develop a quartz fiber system for oxygen meters used in submarines. In 1943 she was asked to go to Berkeley and then to Los Alamos to help develop a quartz micro fiber balance for measuring plutonium. She fell in love with Los Alamos and with Ben Diven, whom she married at Dorothy McKibbin’s house in Santa Fe in 1951. They remained in Los Alamos until 2005 when they left for health reasons.

Beckie was an avid skier, hiker, backpacker and a skilled seamstress. During the war she made sleeping bags, ski pants and jackets in exchange for rides to the ski slopes in Colorado. Before rope tows or lifts were built in Los Alamos, she learned to drive when her ski companions got tired of her skiing every run while they had to take turns driving up and down the hill. They put her in the driver’s seat, pointed the car downhill and she figured it out from there.

During her single years at Los Alamos she lived in the T-177 Dormitory and was appointed to the town council as a dormitory representative. Once the town site was established she was an elected member for several terms.  After they married, she and Ben moved to Western Area where they lived for 55 years and raised their family. She was outgoing, positive and happy to have the house full of kids. She also welcomed an amazing array of pets. She encouraged adventure, exploration and a wide variety of experiences. Her door was open and she had a helping hand for those in need. She was a warm and supportive mother, wife and friend. Ben and Beckie welcomed houseguests from around the world that became life long friends.

In retirement they spent many happy years on trips in their camper van and on trips around the world, always looking forward to learning about different cultures and eating new foods. Annual trips to Mexico started when their children were very young and continued with friends as long as they were able.

She will be deeply missed by her family and many good friends. In lieu of flowers, donations may be made to the Los Alamos Historical Society or a wildlife or nature conservancy of your choice. At her request, no services will be held. The family can be reached in care of Mary Diven, 2640 Douglas Hwy, Juneau, AK 99801.