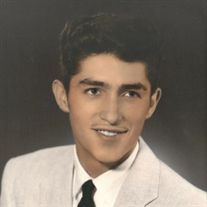 Arthur Joseph Jaramillo, 72, a longtime resident of Pojoaque Valley passed away surrounded by his family on Sunday, September 20, 2015.

Arthur will be forever in our hearts and dearly missed. Arthur is survived by his wife, Linda Jaramillo; daughters, Valerie and Arleen Jaramillo; grandchildren, Jackie and her husband Nick Martinez, Andrew Jaramillo, and Matthew Gallegos; brother, Earl Jaramillo; close nephew, Ken Atkinson; and several nieces, nephews, and other family members. Services are pending at this time and will be posted as soon as they become available.

The family of Arthur Joseph Jaramillo has entrusted the care of their loved one to the DeVargas Funeral Home & Crematory of the Española Valley.