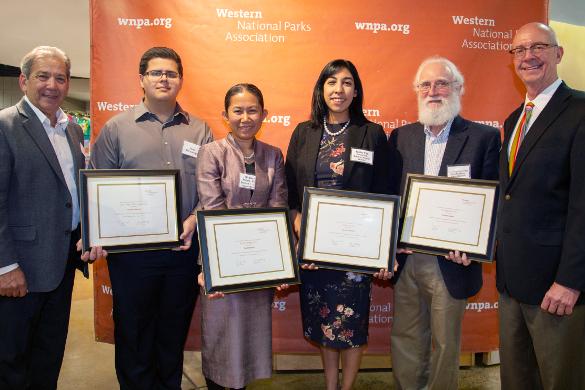 2018 Award Winners. Courtesy photo
WNPA News:
TUCSON, Ariz. — Thursday, Western National Parks Association (WNPA), a nonprofit education partner of the National Park Service (NPS) since 1938, announced the recipients of its annual awards at the WNPA board reception.
For more than 30 years, WNPA has recognized individuals and organizations who make exceptional contributions to national parks and increase awareness of WNPA’s mission.
“We are thrilled to honor those who are dedicated not only to preserving and protecting our national parks, but also to ensuring that the parks can be enjoyed by all,” said James E. Cook, executive director of WNPA.
T.J. Ferguson, professor of anthropology at the University of Arizona, received the Emil W. Haury Award for his distinguished service to the NPS. A recognized leader in cultural landscape theory and collaborative anthropology, Ferguson worked collaboratively with American Indian leaders and elders to provide guidance for the application of important federal legislation, including the National Historic Preservation Act and the Native American Graves Protection and Repatriation Act.
Through his work on cooperative projects, such as archeological surveys and oral history collection, Ferguson has played a crucial role in bringing the voices and perspectives of American Indian tribes to the NPS.
Named for the esteemed anthropologist and archaeologist, the Emil W. Haury Award honors outstanding contributions to scientific research in the national parks and monuments. In 1938 Haury was instrumental in founding the Southwest Monuments Association, the precursor to WNPA. Haury served on the National Park System Advisory Board in the 1960s.
Siriporn Peters, assistant professor in the Department of Art, Communication, and Theatre at Southwestern Oklahoma State University, received the Stewart L. Udall Award for her leadership in the creation of collaborative, engaging, and accessible programs and exhibits at Washita Battlefield National Historic Site in Oklahoma. Her first project, the Touch and See Your Park kiosk, uses braille, tactile graphics, and audio and visual components to help audiences with visual, auditory, or cognitive disabilities learn about the site. The project won the National Park Service Interpretive Design Project Accessibility Achievement Award in 2017. Peters also coordinated art workshops and collaborative projects designed to introduce new audiences to traditional American Indian art forms, creating stronger ties between Washita Battlefield and the local community.
The Stewart L. Udall Award honors those who work to support park interpretation programs, deliver the park message to all audiences, or rally broad support for national parks. The award was named for the renowned conservationist, secretary of the interior (1961­–1969), and former WNPA board member (1984–1994).
Katherine Faz, chief of interpretation and visitor services at Great Sand Dunes National Park & Preserve in Colorado, received the Edward B. Danson Award for her commitment to the shared mission of WNPA and the NPS at Great Sand Dunes. Since 2011 Faz has committed time and resources to support the improvement and growth of WNPA’s park store at Great Sand Dunes. As a result of her continuous and persistent dedication to serving visitors and leveraging the support provided by WNPA, the store reached $1 million in sales for the 2018 fiscal year, a growth of nearly 100 percent over the past four years.
Pepe Marcos-Iga, former chief operating officer of WNPA, posthumously received the Edward B. Danson Award for his support of national parks and his dedication to environmental conservation. As a member of the North American Association for Environmental Education (2007–2018) and the WNPA board (2014–2016), education was a key focus of Marcos-Iga’s career. He was committed to connecting new audiences and younger generations to our national parks, and his commitment strengthened and enhanced WNPA’s programs and services for park visitors.
The Edward B. Danson Award honors those who show exceptional support and loyalty to the WNPA mission and national parks. The award was named for the noted archaeologist and director of the Museum of Northern Arizona (1956–1975). Danson served as a member of the WNPA board and the National Park System Advisory Board. He was awarded the Department of the Interior Conservation Award in 1986.
About WNPA
Western National Parks Association (WNPA) helps make the national park experience possible for everyone. As a nonprofit education partner of the National Park Service, WNPA supports parks across the West, developing products, services, and programs that enhance the visitor experience, understanding, and appreciation of national parks. Since 1938 WNPA has worked to connect new generations to parks in meaningful ways, all with one simple goal: create advocates who want to preserve and protect these special places for everyone, for all time. Learn more at www.wnpa.org.
Menu
Los Alamos
61°
Fair
5:50am8:25pm MDT
Feels like: 61°F
Wind: 0mph W
Humidity: 49%
Pressure: 30.21"Hg
UV index: 0
FriSatSun
81/59°F
73/54°F
66/55°F
Weather forecast Los Alamos, New Mexico ▸