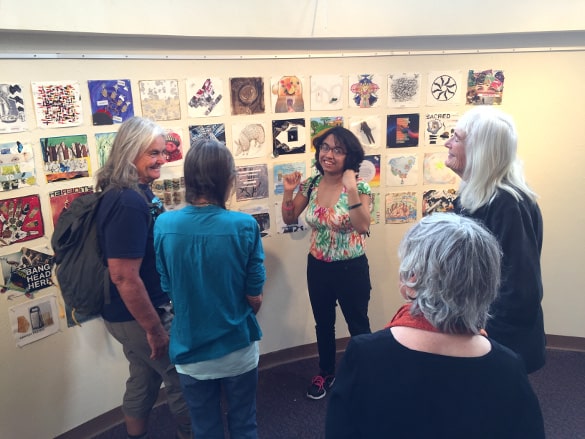 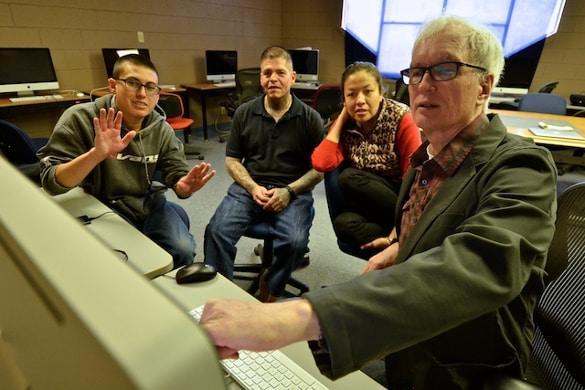 Tomas Barela, Robert Trujillo, Sharon Henderson, and Professor David Lindblom. Courtesy photo
ART News:
In February 2018, the film Hizo lo que quiso (She Did It Her Way) was an official entry in the Santa Fe Film Festival. Produced and directed by Northern Film and Digital Media Arts graduate Stephanie Martinez and Northern student Daniel Valerio, the film features El Rito singer and songwriter Veronica Ortiz, aka, the Gypsy Nun.
Watch the film here: https://www.youtube.com/watch?time_continue=7&v=Zsy9-elJIjU
Quick on the heels of this accomplishment, another wave of Northern students have a film in the New Mexico Filmmaker Showcase. Made by FDMA majors Aaron Lopez, Samuel Herrera, Daniel Padilla, Michael Trujillo and Tomas Barela, The Hitchhiker is a one minute thriller inspired by Alfred Hitchcock’s Psycho.
They were assisted by Northern student actor Zeke Barela. Future FDMA student, 8-year-old Lexie Lopez, helped with location stills and makeup.
Aaron Lopez, who spearheaded the effort says, “What we learned from this project was many things: such as format, time management, and team work. This experience has helped us all become better filmmakers and gave us an understanding of what a film deadline actually meant.”
The Hitchhiker can be seen here where you can vote to register your support for our students by clicking the thumbs up: https://nmfilmoffice.submittable.com/gallery/07ed0742-afb3-476e-8210-3decf42121d7/9844004/
Following the experience of The HItchhiker, Mr. Lopez has taken a film and media position at local business PMI where he is deploying his considerable skills to brand and market PMI’s green cleaning products. Thanks to local business PMI, for tapping the talent of our students and opening professional positions for our students to grow our community.
Fellow crew member, Daniel Padilla, is exploring acting work on the set of Better Call Saul, the Breaking Bad spinoff.
In further film accomplishments, FDMA student and actress Sharon Henderson performs in two major feature films. Sharon acts in Woman Walks Ahead, which will screen in the Tribecca Film Festival in New York City in late April. Woman Walks Ahead stars Jessica Chastain and Sam Rockwell.
Sharon also appears in Hostiles, which stars Christian Bale and Wes Studi and is in theaters now.
Two other films Sharon acts in are featured in the New Mexico Filmmaker Showcase, Midnight Shanghai and Rez Life.
Midnight Shanghai can be seen here:
https://nmfilmoffice.submittable.com/gallery/07ed0742-afb3-476e-8210-3decf42121d7/9899532/
and Rez Life here:
https://nmfilmoffice.submittable.com/gallery/07ed0742-afb3-476e-8210-3decf42121d7/9909367/
Finally, FDMA major TaiShanna Sanchez’s artwork, which is part of the Word/Play artshow at the Nick Salazar Center for the Arts, was featured in an article in the local newspaper.
“I was surprised to see my word art featured in the paper. I’ve never been prouder of myself for what I have done. Most of the female artists I met at the art show told me that my piece was inspirational,” TaiShanna said.
Menu
Los Alamos
36°
Fair
7:11am5:22pm MST
Feels like: 36°F
Wind: 0mph ENE
Humidity: 44%
Pressure: 30.25"Hg
UV index: 2
MonTueWed
46/25°F
43/21°F
37/19°F
Weather forecast Los Alamos, New Mexico ▸