AGU: North Pole Solar Eclipse Excites Auroras On The Other Side Of The World 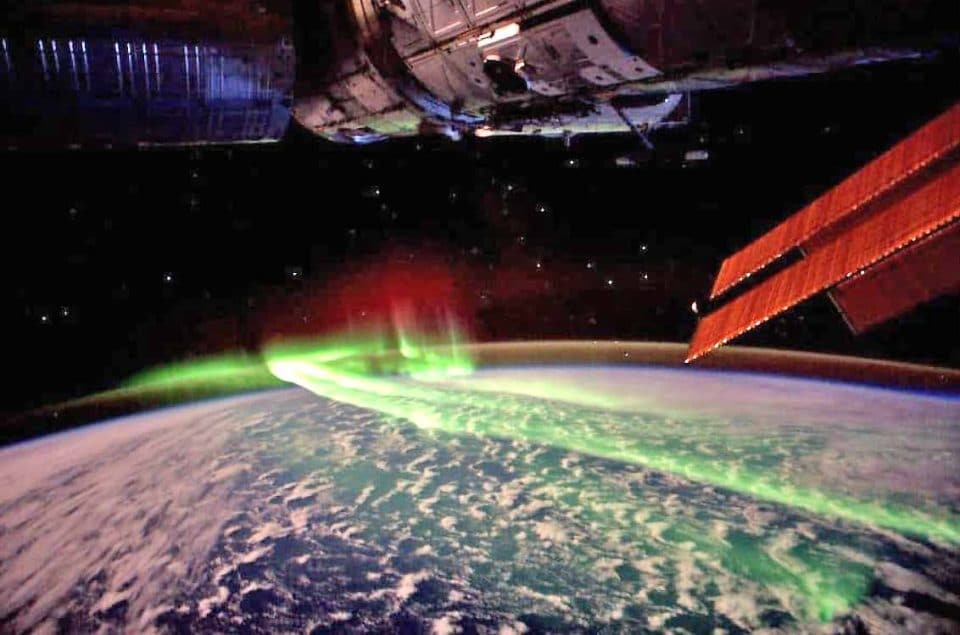 Energy and particles from the sun interact with gases in the atmosphere to create stunning light shows called auroras, like this instance of the Southern Lights seen from the International Space Station in 2012. Courtesy/AGU

WASHINGTON, D.C.—A solar eclipse over the Arctic created changes in auroras in both of Earth’s hemispheres due to connections through the planet’s magnetic field, according to a new study.

The new work could help scientists predict changes in the near-Earth environment that can interfere with satellite communication.

June 10, 2021, the moon’s shadow darkened much of the Earth’s northern polar region, providing scientists with an unprecedented opportunity to explore the impacts natural events have in Earth’s geospace, thousands of kilometers above Earth.

The eclipse affected auroras in both the Northern and Southern hemispheres, according to the new study, published in the AGU journal Geophysical Research Letters, which publishes high-impact, short-format reports with immediate implications spanning all Earth and space sciences.

Auroras are the shimmering light shows in the sky that flare up when solar storms shoot out energy and particles that interact with gases in the atmosphere. Some of those particles travel along the lines of Earth’s magnetic field to the poles, creating the northern lights in the Northern Hemisphere and the southern lights in the South.

“Excitingly, we found that the aurora and upper atmosphere were disturbed in the Southern Hemisphere where the eclipse did not cover,” Dang said. “This is because the upper atmosphere in the two hemispheres is connected through the magnetic field lines and the magnetosphere.”

The new research represents the first time scientists have shown how an eclipse affects the coupling between the ionosphere—the regions where energy from the Sun ionizes the atmosphere and where auroras occur—and the magnetosphere, the bubble around Earth created by Earth’s magnetic field.

Dang and his colleagues discovered the eclipse not only altered the local atmosphere under the moon’s shadow but also caused rings around the poles to form in the currents in the ionosphere and changed the activity of the auroras in both hemispheres. The rings are the result of disturbances to the electron density in the atmosphere created by charged aurora particles.

The new research improves scientists’ understanding of the geospace environment and could help researchers predict the effects from future eclipses. This new study also illustrates the sizable impact of the solar eclipse on the ionosphere, which can absorb, bend and reflect the radio signals used by Global Positioning System (GPS) satellites, potentially creating disturbances in communication and navigation.

Geospace is the region around Earth that covers the upper atmosphere to the edges of Earth’s magnetic field. It includes the ionosphere, which comprises regions of the upper atmosphere with large numbers of electrically charged ions and electrons. These charged particles occur when energy from the Sun knocks electrons off of gas molecules in the atmosphere, and so their numbers increase during the day and drop at night.

Previous studies have shown that a solar eclipse can also reduce the density of particles in the ionosphere in the path of the shadow.

Dang and his collaborators developed a model that combines the upper atmosphere, the magnetosphere and electrical currents flowing in this system and used it to understand how the June solar eclipse affected Earth’s geospace.

The current system in the ionosphere is complicated, so the researchers focused specifically on the currents flowing between the magnetosphere and the ionosphere along the magnetic field lines. These lines run out from the South Pole, around the planet to the North Pole and down through its axis.

They were surprised that the eclipse caused even stronger auroral activity in the unobscured Southern Hemisphere than in the Northern Hemisphere. These changes in the auroras could potentially be seen by observers.

“This is unique and interesting research that modeled global impacts of the solar eclipse,” said Toshi Nishimura, a space physicist at Boston University who was not involved in the research. “Usually, people don’t think about the connection between the solar eclipse and aurora because the eclipse is a daytime phenomenon and the aurora is a phenomenon in the night at high latitudes. But an eclipse can sometimes occur at high latitudes and this research demonstrated its impact on aurora.”