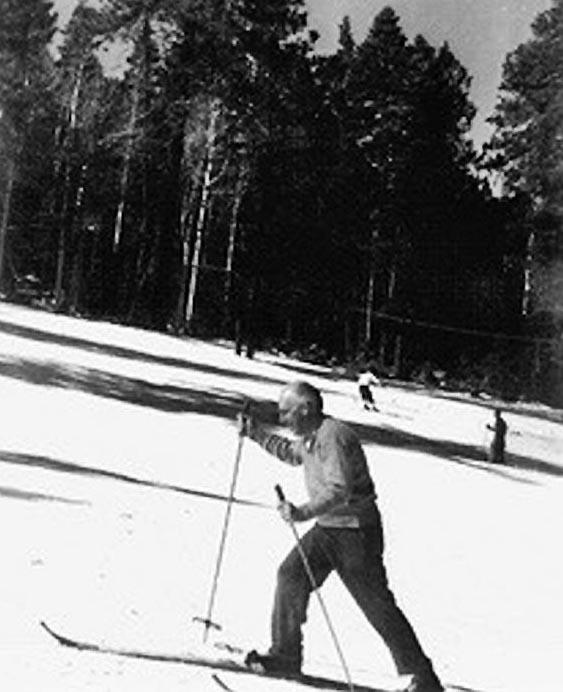 Neils Bohr was an avid skier long before coming to Project Y at Los Alamos and assuming the codename of Nicholas Baker. Photographs were strictly forbidden during those days, but someone snapped this picture of Bohr on skis at Sawyer’s Hill. Courtesy/Los Alamos Historical Society

Los Alamos has had its share of prominent and important visitors through the years. One of the most significant was in December 1943, when brilliant Danish physicist Niels Bohr visited.

Bohr won the 1922 Nobel Prize for contributions that laid the foundations for understanding the structure of the atom and for quantum physics. He was considered a wise and elder statesman (at only age 58), when he was forced by the Nazi invasion to flee his Denmark home for Sweden.

In September 1943, Bohr, whose mother was Jewish, was warned that the Nazis were about to arrest him.

In a secret, rather daring escape, he flew to England in an unarmed high-speed bomber that had been converted to carry cargo over war-torn Europe. Famously, he could not fit the flight helmet over his large head and so missed the pilot’s instruction to turn on oxygen when the plane reached 20,000 feet. As a result, Bohr passed out and only woke up when the aircraft was close to English shores.

After spending time with famous European scientists such as Sir James Chadwick, Bohr was sent to the United States as a scientific consultant for the British scientists working on the top-secret “Tube Alloys” project, the British uranium atomic bomb development effort.

He was met in New York by Gen. Leslie Groves and whisked away to a hotel, where he stayed under the assumed name Nicolas Baker. The ruse may have been for naught, though, as Bohr had his name displayed prominently on his luggage.

Bohr’s visit to Los Alamos came at a critical time in the Manhattan Project. Scientists were struggling with the technicalities of the implosion bomb. The winter was cold, and the unpaved streets switched from frozen to muddy on a regular basis.

“Bohr’s arrival at Los Alamos buoyed everyone’s spirits,” wrote Jennet Conant in 109 East Palace: Robert Oppenheimer and the Secret City of Los Alamos. “He was famous as one of the fathers of quantum theory and had taught a whole generation of physicists how to change their way of thinking … Many of the project members had studied with him and had made the pilgrimage to his Institute of Theoretical Physics in Copenhagen.”

During a lecture after the war, Oppenheimer recalled, “Bohr at Los Alamos was marvelous. He made the enterprise seem hopeful when many were not free from misgivings.”

Oppenheimer credited Bohr with “reenergizing” the team, especially with his hope that the outcome of the project would be good and that “the cooperation which he had experienced among scientists would play a helpful part; all this, all of us wanted very much to believe.”

On Jan. 17, 1944, Bohr headed back to Washington and then London, where he was to meet with Winston Churchill about the post-war implications of atomic weapons and their proliferation. It would be a topic that concerned him throughout the rest of his life.

In 1950, Bohr wrote an “Open Letter” to the United Nations that called for international cooperation on nuclear energy. The UN followed his suggestions when it created the International Atomic Energy Agency, whose inspectors receive training in Los Alamos to this day.

One of the most famous photographs of Bohr’s visit to the United States shows him vigorously skiing at Sawyer’s Hill, the ski area used by the Los Alamos Ranch School boys and members of the Manhattan Project. Next week’s history article for the Los Alamos Daily Post will focus on the early years of skiing in Los Alamos.