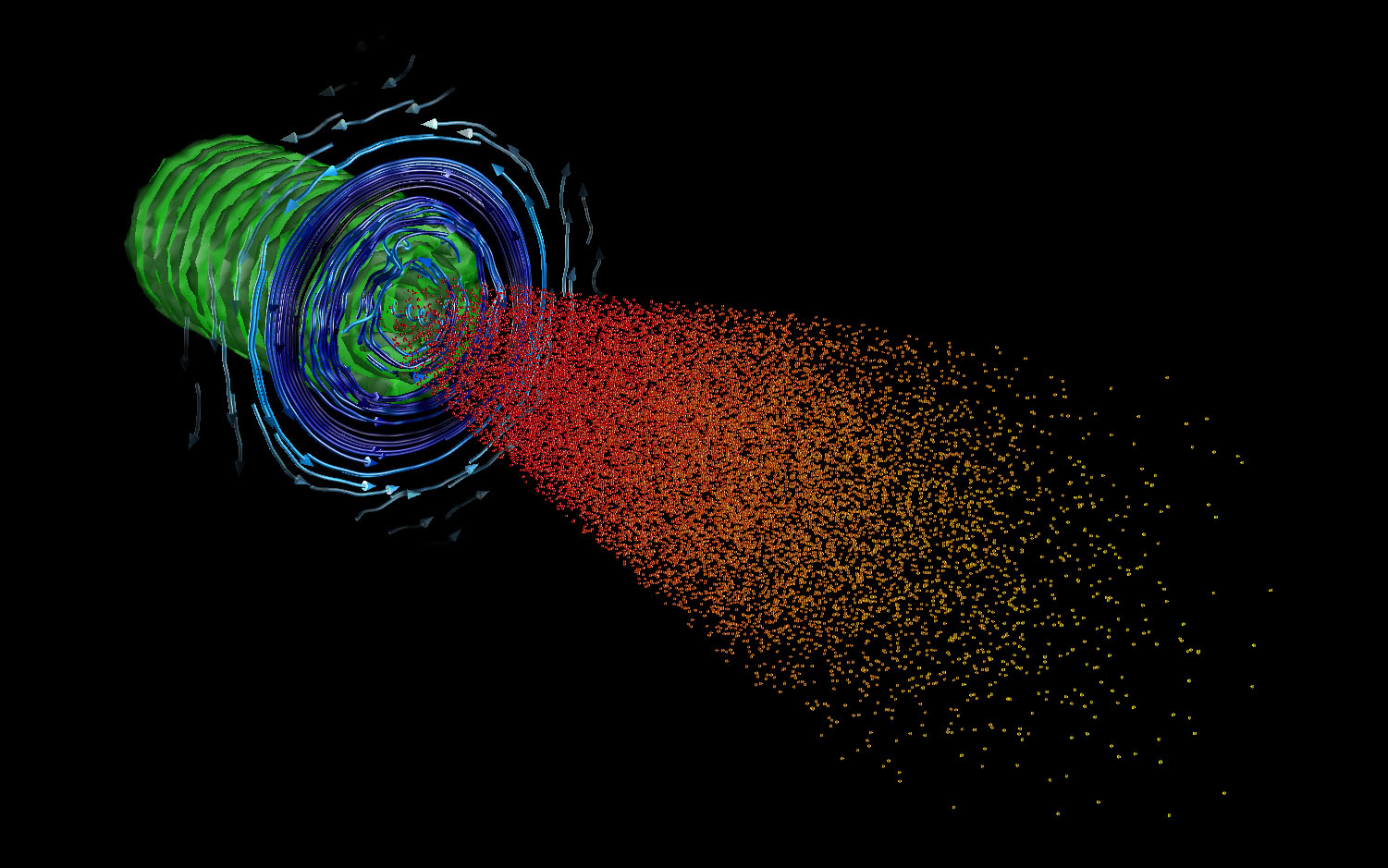 OSIRIS simulation on Sequoia of the interaction of a fast-ignition-scale laser with a dense DT plasma. The laser field is shown in green, the blue arrows illustrate the magnetic field lines at the plasma interface and the red/yellow spheres are the laser-accelerated electrons that will heat and ignite the fuel. Courtesy/NNSA

The move is in support of the Stockpile Stewardship Program, which helps the United States ensure the safety, security and effectiveness of its aging nuclear weapons stockpile without the use of underground testing.

“The success of early science runs on Sequoia have prepared the system to take on the complex calculations necessary to continue certifying the nation’s aging nuclear stockpile,” said NNSA Assistant Deputy Administrator for Stockpile Stewardship Chris Deeney. “Sequoia’s mammoth computing power will provide scientists and engineers with a more complete understanding of weapons’ performance, notably hydrodynamics and the properties of materials at extreme pressures and temperatures. These capabilities provide confidence in the U.S. deterrent as it is reduced under treaty agreements and represent the nation’s continued leadership in high performance computing.”

Bob Meisner, director of the ASC program, says that among the critical enhanced capabilities Sequoia provides is uncertainty quantification, or UQ, the quantitative characterization and reduction of uncertainty in computer applications made possible by the running of large suites of calculations designed to assess the effects of minor differences in the systems.

Sources of uncertainty are rife in the natural science and engineering. UQ uses statistical methods to determine likely outcomes.

“The work we’ve done to date on Sequoia gives every indication that we will be able to run suites of highly resolved uncertainty quantification calculations in support of ASC’s effort to extend the life of aging weapons systems such as the B61 and W78 – what we call the life extension program,” Meisner said. “By reducing the time required for the studies that underlie life extension, total costs also are reduced. The machine will also provide a means to do an assessment of its entry-level 3-D UQ capabilities. 3-D UQ will become increasingly important as the stockpile ages.”

Additionally, NNSA expects the machine to enhance the program’s ability to: sustain the stockpile by resolving any significant findings in weapons systems; bring greater computing power to all aspects of the annual assessment of the stockpile; and anticipate and avoid future problems that inevitably result from aging.

These capabilities help ensure that the nation will never have to return to nuclear testing. Supercomputers such as Sequoia have allowed the U.S. to have confidence in its nuclear weapons stockpile over the 20 years since nuclear testing ended in 1992.

The insights that come from supercomputing simulations also are vital to addressing nonproliferation and counterterrorism issues as well as informing other national security decisions such as nuclear weapon policy and treaty agreements.

Delivered and deployed in early 2012, the 96-rack Sequoia machine not only took the No. 1 ranking on the June 2012 Top500 list of the world’s most powerful supercomputers, it was also rated as the world’s most energy efficient system and earned top honors on the Graph500 list for its ability to solve big data problems – finding the proverbial needle in the haystack.

While Sequoia dropped to No. 2 on the November 2012 Top500 list, it remains one of the most energy efficient HPC systems and retained its No. 1 Graph500 ranking.

Early unclassified work on the machine allowed NNSA researchers and IBM computer scientists to work out the bugs and optimize the system before it transitioned to classified work.

LLNL researchers performed record simulations using all 1,572,864 cores of Sequoia to study the interaction of ultra-powerful lasers with dense plasmas in a proposed method to produce fusion energy, the energy source that powers the sun.

Sequoia is the first machine to exceed one million computational cores. The simulations are the largest particle-in-cell (PIC) code simulations by number of cores ever performed and are important to laser fusion experiments in LLNL’s National Ignition Facility (NIF.)

PIC simulations are used extensively in plasma physics to model the motion of the charged particles, and the electromagnetic interactions between them, that make up ionized matter. For more, see the March 19, 2013, announcement.

In addition, LLNL scientists investigated burn in doped plasmas, exploiting the full capability of Sequoia and the code developed for this purpose.

Following a benchmark exploration of the density and temperature dependence of burn in undoped hydrogen plasma, researchers began a series of extreme-scale simulations of burn in the presence of small fractions of a percent of high-Z dopants.

These studies are being used to deepen scientists’ understanding of the effect of dopants on burn, physics that is vital to capsule design for NIF, a facility critical to NNSA’s stockpile stewardship program.

QBox was developed at LLNL to perform large-scale simulations of materials directly from first-principles, allowing scientists to predict the properties of complex systems without first having to carry out experiments.

Sequoia also demonstrated its great scalability with a 3-D simulation of the human heart’s electrophysiology. Using a code created in a partnership between LLNL and IBM scientists called Cardioid, researchers are modeling the electrical signals moving throughout the heart.

Cardioid has the potential to be used to test drugs and medical devices, paving the way for tests on humans. Techniques employed by the code are useful to Sequoia’s national security applications.

Development of Cardioid is continuing on a smaller version of Sequoia called Vulcan, a five petaflop/s BlueGene/Q system used for unclassified research collaborations.

Sequoia was recognized with a Breakthrough Award from Popular Mechanics as one of the top technology innovations of 2012.

These videos explain how NNSA uses supercomputers to maintain the nation’s nuclear weapons stockpile without the need for underground testing: