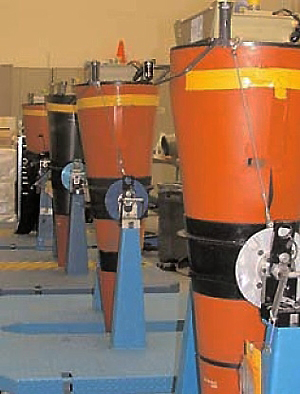 WASHINGTON, D.C. – The National Nuclear Security Administration (NNSA) has announced that it delivered all of its scheduled W76-1 Submarine Launched Ballistic Missile warhead units to United States Navy in FY 2012.

“As our stockpile ages, we have to put ourselves in a position where the president can be certain that it is safe, secure and effective,” said NNSA Deputy Administrator for Defense Programs Don Cook. “Our continued success with the W76-1 Life Extension Program is key to the United States’ nuclear deterrent. As we move forward with other life extension programs, we’re looking at our joint work with the Navy on the W76 as a model for the future – one where we’re on time, on budget and delivering exactly how the American people need us to.”

The W76-1 Life Extension Program’s first production unit was achieved in September 2008. The program remains on track to produce and deliver the warheads to the Navy in keeping with its commitment to complete production not later than the end of FY 2021, which is consistent with the Nuclear Posture Review.

The primary goals of the W76-1 Life Extension Program are to extend the original warhead service life from 20 to 60 years, address identified aging issues, and meet requirements identified by the U.S. Strategic Command (STRATCOM.)

In addition, the goals of the program are to incorporate nuclear surety enhancements, maximize reuse of W76-0 components, minimize system certification risk in the absence of underground nuclear testing, and refurbish the system in a managed affordable manner.

As a key part of its national security mission, NNSA, through its Office of Defense Programs, ensures that the U.S. nuclear arsenal meets the country’s national security requirements and continues to serve its essential deterrence role.